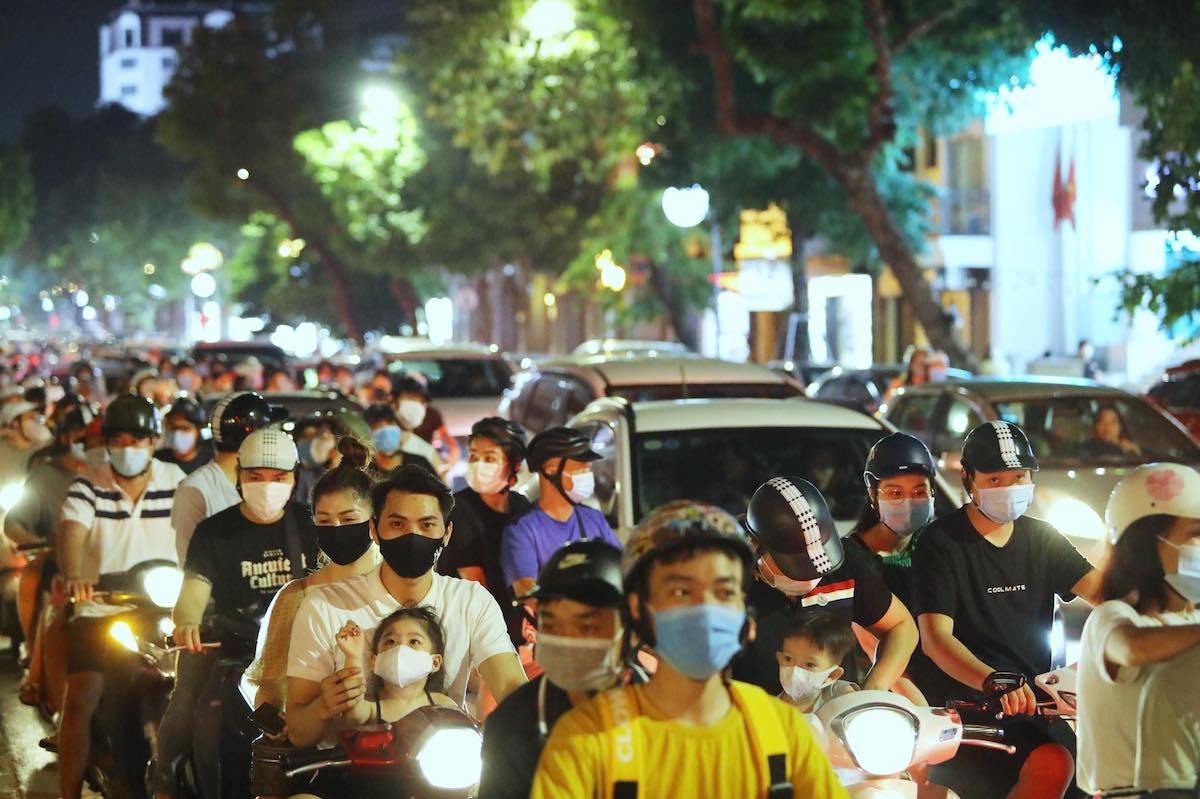 HanoiThe streets around Hoan Kiem Lake were crowded with people going to the Mid-Autumn Festival, prompting authorities to set up barriers in some areas, on the evening of September 21st.

From 7.30pm onwards, a group of people from Trang Thi, Hue, Hang Bong, Hai Ba Trung … streamed into the area around Sword Lake, leading to congestion on Dinh Tien Hoang and Le Thai To streets.

Mr. Le Hoang Anh from Ha Dong said that after almost two months of being mostly at home, he went out today for the first time with a group of 5 friends. “We decided from home to go to Sword Lake and then to West Lake, but there are no restaurants open to sit and chat,” Hoang Anh said.

Along Hang Bai Street, the stream of cars moved meter by meter, with three lanes coming one way into Dinh Tien Hoang and Trang Tien streets. Many families take their children out, most wearing masks.

The Trang Tien police force mobilized pick-up trucks to cross the street, with loudspeakers to constantly remind and to ask people to disperse and ensure distance.

Off the streets around Sword LakePeople also radiate in the old urban area like Hang Ma, Hang Luoc, Hang Ca, Hang Trong. Shops in these streets are closed, but a few groceries and drinks are open for take-out.

In a supermarket on Hang Trong Street, the inside was full of people, outside the security guards were constantly leading customers to queues and separate channels.

Phan Hong Nhung, vice-chairman of the People’s Committee of Hang Ma Ward, said that Hang Ma Street sells items that are not on the list of allowed businesses during the quarantine period, so the district has many days to campaign for establishments not to open. shops, avoid large gatherings.

“Today is the first day for the implementation of the new guideline on reducing the distance so that people can get to Hang Ma freely, the district has strengthened the inspection force and set up a temporary checkpoint for separating cars,” said Ms. Nhung.

At 9 p.m., the patrolling force recalled closing the stores; On some streets like Hang Ma, the police set up barricades at both ends.

On Hang Rui Street, police and militiamen stood to form a fence to prevent the convoy from entering the center, and arrange for them to go to the streets outside. At 22:00 the traffic on the central streets started to cool down.

Today is the first day that Hanoi has changed from implementation of Directive 16 to Directive 15. People may use the traffic without a road permit.