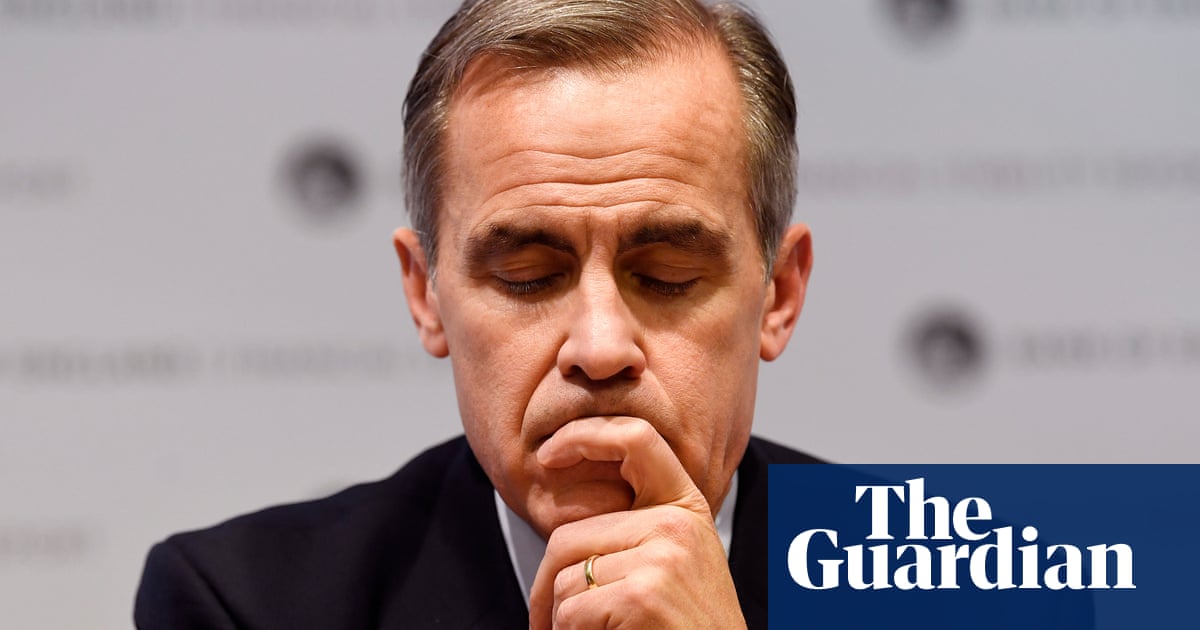 Top story: 'Nothing beats the deal we have as EU members'

Modeling by the Bank of England predicts that even under Theresa May's Brexit deal, described as a close economic partnership with Brussels, the British economy would be at least 1% smaller by 2024 than it would have been under a remaining vote.

The bank governor, Mark Carney, has denied scar removal, insisting that the analysis was demanded by Parliament. "We have to do it," he said. Hours earlier, a whitehall analysis concluded the UK would be significantly worse off under five possible Brexit scenarios in 15 years' time and Philip Hammond, the Chancellor, conceded the UK would be worse off regardless of Brexit. The Labor MP Chuka Umunna said: "The data is clear: nothing beats the deal we have as members of the EU."

With less than a fortnight to go before the "meaningful vote" in the Commons, the government plans to allow MPs – from hard brexiters to supporters of "people's vote" – to create a string of potential amendments, in the hope of demonstrating that None of them can command majority support. They hope MPs will be more inclined to support May's plan.

But Labor is also considering tabling in amendment setting out its own alternative Brexit policy, in the hope that it can demonstrate significant parliamentary backing. It would repudiate May's plan and commit parliament to pursue every alternative option, except for no deal. While John McDonnell, the shadow treasurer, did not mention the people's vote, said yesterday that Labor would "inevitably" return to a second referendum if it was unable to force a general election.

HS2 blockade – Overnight, protesters have blocked work on the High Speed ​​2 rail link by shackling themselves in a nature reserve in Hillingdon. Police and work crews left the site at the Colne Valley nature reserve where the activists chained themselves to a contraption made of chimney pieces. One activist said she was part of Extinction Rebellion, the movement that stopped traffic in London: "We're doing this because we need to stop this crazy destruction of our planet."

Farage ally under Trump-Russia microscope – Ted Malloch, a London-based ally of Nigel Farage, was asked to obtain secret information from WikiLeaks for Donald Trump's 2016 election campaign, according to US investigators. Malloch, 66, is of interest to the Trump-Russia inquiry as a possible link between Trump's White House bid and the campaign for Brexit. Papers from Robert Mueller's investigation say Malloch was sent an email from Roger Stone, a "dirty trickster" close to Trump, wanting someone to contact Julian Assange, whose WikiLeaks group just published the first transaction of e-mails from the Democratic Party. There are reports in the US that the former Trump campaign chairman Paul Manafort is under greater scrutiny from Mueller over his meeting with the Ecuadorian president in 2017. On Tuesday sources told the Guardian that Manafort met Assange in the Ecuadorian embassy in London, a claim denied by both men.

'90 -90-90 'landmark – The UK has hit a key UN target on the way to check the spread of HIV by successfully diagnosing and effectively treating more than 90% of people with the virus. UNAIDS has set a "90-90-90" target for every country, challenging health authorities to diagnose more than 90% of HIV-positive people, put 90% on treatment, and ensure 90% viral suppression – keeping their level of HIV so low they are no longer infectious. In Russia, the situation is to the contrary: The World Health Organization is warning of an epidemic as the number of cases increases, partly because of social stigma preventing people getting treatment.

Boring Company moves on – Elon Musk has scrapped plans to dig through wealthy West Los Angeles after a dispute with residents over environmental assessments. Musk's Boring Company announced it will build a tunnel at Dodger Stadium. The tunnels are alled by Musk as its solution to "soul-destroying traffic" and a way to make roads "go 3D". The first two-mile section of a test tunnel in Hawthorne, California, across the street from Musk's SpaceX Headquarters, is scheduled to be completed next month. The Dugout Loop is a 3.6-mile tunnel connecting Dodger stadium and a Metro subway station. The loop, according to Musk's vision, will be "a zero-emission, high-speed underground public transport system" carrying passengers on electric "skate" vehicles at 125 to 150 miles per hour.

Let there be revels – The youth of today, they are all "mead mead mead". The ancient brewed-honey intoxicant is becoming a popular supermarket product after winning fans among younger drinkers in pubs and at beer festivals. Sales have increased by an average of 10% per annum for the past three years, according to English Heritage, which says it is selling an average of one bottle every 10 minutes through its gift shops. Beer festivals organized by the real ale group Camra now have well-stocked mead sections. The Cambridge beer festival this month serves 15 different meats, all brewed in the UK and ranging in alcoholic strength from 4% to 17%.

The death of American missionary John Allen Chau on a remote Indian island has sparked a backlash. The Guardian's Michael Safi describes how Chau was killed after trying to preach Christianity to one of the world's last remaining totally isolated hunter-gatherer societies. Plus, John Harris on the trouble with Airbnb.

"At the heart of successful liberal democracies lies a remarkable collective leap of faith: when public officials, reporters, experts and politicians share a piece of information, they are supposed to do so honestly," writes William Davies, the sociologist and political economist. "To understand the crisis liberal democracy faces today – whether we primarily identify it in terms of populism or post-truth – it's not enough to simply complain the rising cynicism of the public.

"The problem is that, over a number of crucial areas of public life, the basic intuitions of populists have been repeatedly verified. One of the main contributors to this is the spread of digital technology, creating vast data trails with the latent potential to contradict public statements, and even suppressing entire public institutions. While it is impossible to conclusively prove that a politician is morally innocent or that a news report is undistorted, it is far easier to demonstrate the opposite. Scandals, leaks, whistleblowing and revelations of fraud all serve to confirm our worst suspicions. While trust relies on a leap of faith, distrust is supported by ever-mounting piles of evidence. And in Britain, this pile has expanded much faster than many of us have been prepared to admit. "

Jürgen Klopp accused Paris Saint-Germain – and Neymar in particular – making Liverpool "look like butchers" as his team suffered a third consecutive away defeat for the first time in the Champions League group stage. At Wembley, Tottenham's hopes of qualification remained alive after Christian Eriksen punched to give Spurs a crucial victory over Internazionale, but Mauricio Pochettino's side must now match Inter's result on the final matchday when they travel to the Camp Nou to play Barcelona. Arsenal's Europa League match against Vorskla Poltava today remains in doubt after the Ukrainian side said they do not know where the game can be played.

Finally, after 15 games, 773 moves and 51 hours of simmering tension, the Norwegian World Chess Champion Magnus Carlsen held his nerv, and his crown, with an emphatic rapid-play victory over the US challenger Fabiano Caruana. Racing 92's bid to sign the New Zealand captain Kieran Read next year's World Cup on a £ 1m-year contract could be gazumped if Premiership clubs accept an investment of more than £ 200m from a private equity firm next month. Tyson Fury and Deontay Wilder's pre-fight press conference descended into chaos when the heavyweights faced off in Los Angeles. And Michael Clarke has strongly criticized suggestions from a prominent Australian journalist that the national cricket team's cultural issues can be traced back to his appointment as captain.

Asian stocks have followed Wall Street higher on Thursday after the US Federal Reserve chairman, Jerome Powell, suggested the pace of interest rate increases might slow. UK banks are strong enough to survive a disorderly Brexit that could leave the country worse off than the 2008 financial crisis, according to the Bank of England. For a second straight year, none of the high street lenders have been told to raise millions of pounds in capital to strengthen their finances under the latest "stress test". The pound is trading at $ 1,284 and € 1,127 this morning.

The warning from the Bank of England governor Mark Carney about the economic impact of a no-deal Brexit is all over the front pages of Thursdays as you can see here. The Telegraph ("Carney unleashes" Project Hysteria '") and Express ("Bank boss Carney's Project Hysteria '") quote Jacob Rees-Mogg in their headlines. The Sun has the headline "Carnage" under a picture of Carney's face, leading to the impact of a "brutal no deal Brexit" on house prices.

The Guardian It plays straight: "Warnings over economy deal blow to May's Brexit strategy", as does the Times: "No-deal Brexit would be worst since 1930's." The FT says "May forced to concede all Brexit roads will lead to poorer Britain", and the i reports "Bank warns of worst economic slump since second world war". The Mail Ignores Carney's comments, focusing on news that reflects more favorably on the PM about Andrea Leadsom: "Key cabinet Brexiteer: I'm backing May's deal" and the Mirror Somebody buries the song, splashing with "May's deal will cost us £ 100 billion", before adding (in much smaller type) that "it still beats the £ 200bn price of 'no deal'".

The Guardian Morning Briefing is delivered to thousands of inboxes bright and early every weekday. If you are not already receiving it by email, you can sign up here.