The Brexit secretary "behaves like a thief in the night" 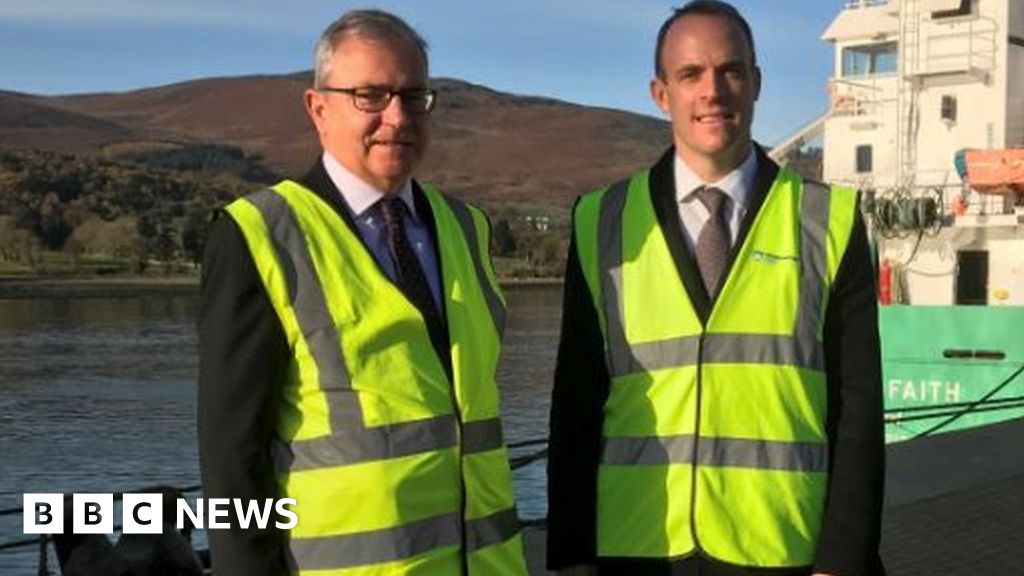 Dominic Raab Brexit's secretary is accused of being "behaving like a thief in the night" during his visit to Northern Ireland.

He visited the Warrenpoint harbor in Down County and the Larne harbor in Antrim County.

But Sinn Fen protested against South Down, Chris Hazzard, that Mr. Raab refused to meet with local politicians.

Outside the Warrenpoint harbor, Mr. Hazzard said that "cynicism and disrespect" exemplifies the South Down voters and that Mr. Raab came "as a thief in the night" without listening to people and their concerns about Brex.

"I suspect he did not want to hear the voice of the people of the area," he said.

The "backstop" in Northern Ireland remains the most unresolved issue in the current revocation negotiations.

Colin Shannon of Newry Chamber of Commerce says Mr. Raab's visit to Warrenpoint "welcomes local businesses to highlight our concerns about the border and future trade relations with the EU".

"It was a useful visit, listening to the concerns of local businesses, especially North-South trade," he said.

He said that the open border and the freedom of the east and west trade were essential for the continued success of the port.

Backstop is an agreement that can be applied if the Irish border can not be kept frictionless as it is now under a wider contract.

The EU and the United Kingdom agreed on the need for reversal, but not its functioning.

The EU has proposed a reversal which means that Northern Ireland remains in the EU customs union, a large part of the single market and the EU's VAT system.

The UK government rejected the threat of UK integrity and suggested a step back that the United Kingdom would remain in line with the EU customs union for a limited time.

A letter from Mr Raab, published earlier this week, suggested that within three weeks he should agree on the United Kingdom's withdrawal from the EU.

The Secretary of the Brexit told the Committee of Representatives that he was pleased to announce that he would provide evidence "when finalizing a transaction" and "is currently expected to be 21 November".

However, Mr Raab's own department later stated that "there is no date for the conclusion of the negotiations".

On November 21, the date offered by the chairman of the committee was added, he added.

Meanwhile, the Foreign Minister of Ireland said the United Kingdom had the task of "intensifying" the negotiations.

Simon Coveney, who met Mr Raab Tuesday evening, said that time was short, and until a comprehensive three-week trial had taken place, he could soon be formed.

Mr Coveney and Irish Minister of Justice Charlie Flanagan will meet on Friday, Friday, in Dublin at the recent British-Irish Intergovernmental Conference (BIIGC).

This will be the second time in about three months after the conference has been convened for more than a decade.

The British Government is represented by Karen Bradley, Minister of Northern Ireland and Minister David Lidington.