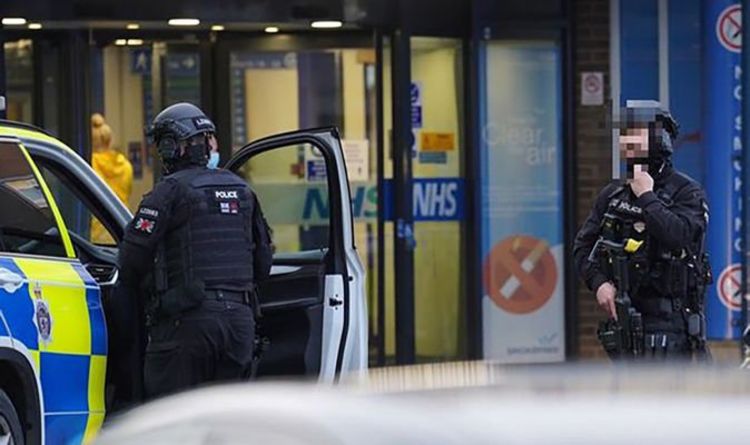 Officials with guns strangled in the University Hospital of North Tees in Stockton-on-Tees, Durham County, at 7:45 p.m. Witnesses saw them handcuffing a topless man and bumping him into a police station.

Three armed units, six armed policemen, and other policemen and women were present, according to Teesside Live.

Photos show officers guarding a building near the large hospital.

One witness said: “They all ran into the hospital and brought a man out without a top. Not sure why.”

Another said, “I don’t know what’s going on, I just come for work and don’t even know if I can get in there.

“I just saw a charge of police running with guns.”

A Cleveland police spokesman said: “A man in his forties was arrested a short time later on suspicion of possession of an offensive weapon and assault.

“He was arrested by the police and no one was injured in the incident.”

A spokesman for North Tees and Hartlepool NHS Foundation Trust said: “After an incident at the University Hospital of North Tees this morning, police were called and the scene was attended to.

“We can confirm that a man has been arrested – as this is an ongoing case, we can not comment at this time.”