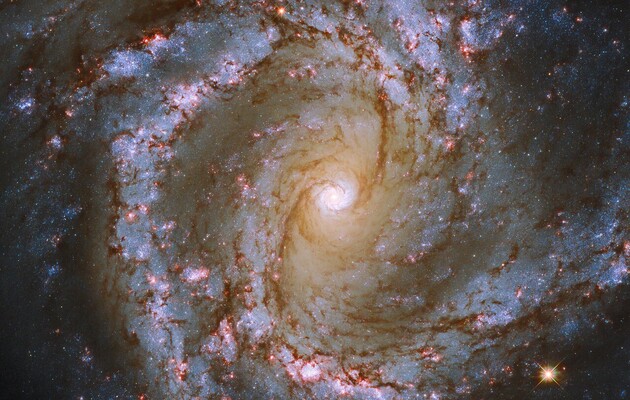 Scientists using the Hubble Space Telescope have taken a picture of the galaxy M61, which lies at a distance of 52 million light-years from Earth. As noted on the observatory’s website, many red spots can be seen in the spiral arms, allowing the object to be attributed to galaxies with starbursts.

But while the galaxy’s brilliant appearance is impressive, one of its most interesting features is the supermassive black hole at its center. Its mass is five billion times the mass of the sun.

M61 is turned to the “face” of the earth, making it one of the most popular objects for research. The published image was created using data from Hubble and the Very Large Telescope and shows you the galaxy in detail.

Subscribe to our Telegram channel with news about technology and culture.

See also: “Hubble” took a picture of the galaxy in the light of the star

Hubble Telescope was launched into orbit on 24 April 1990 by the crew of the reusable spaceship “Discovery” and has since transferred millions of unique images to Earth, greatly expanding the idea of ​​the structure and origin of the universe. For a quarter of a century, the device performed 1.2 million direct observations of 38 thousand space objects, on the basis of which about 13 thousand scientific papers were prepared. According to experts, “this makes it one of the most effective scientific tools in history.”