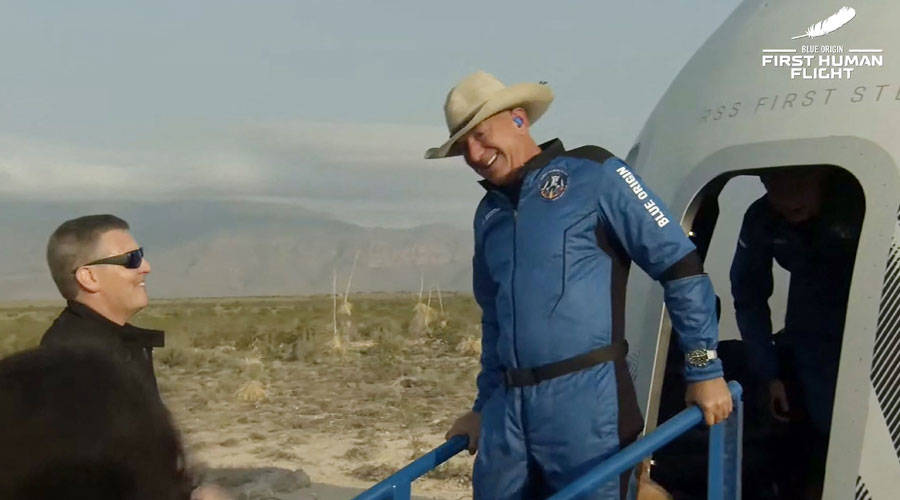 Jeff Bezos, the richest man in the world, fulfilled his dream of entering space on Tuesday, aboard the first manned flight for his company, Blue Origin, which gives an extra impetus to the fluid space tourism sector.
The New Shepard rocket, with a four-passenger capsule, was launched minutes later than the original launch date, from an isolated location in the desert of West Texas, 40 miles from the city of Van Horn.
Together with Jeff Bezos, his brother Mark, the 82-year-old astronaut Wally Funk, and the first customer of the 18-year-old Blue Origin, the Dutchman Oliver Damon, made the latter the oldest and youngest astronauts ever.
The New Shepard blows three times the speed of sound into space with an engine running on liquid hydrogen and oxygen, which is without carbon emissions. Then the capsule separated from the rocket, and the new astronauts spent a few minutes at an altitude of 107 kilometers, past the Karmanline, which is internationally recognized as the boundary between the earth and the space spheres.
The astronauts could view the deep blue and black planet over the rest of the universe from large windows that make up a third of the cabin space. “It’s all black here,” Funk said, according to the capsule’s live audio feed. After a few minutes of zero-gravity testing, the capsule dropped into free fall before deploying three massive parachutes to sink after a flight of about ten smoothly into the desert. As they left the capsule, the four passengers, who were in good shape, were greeted with cries of joy from the Blue Origin teams, and Jeff Bezos was wearing a cowboy hat.
The rocket returned spontaneously to a landing platform near the launch site. The mission comes on the 52nd anniversary of the first steps of Neil Armstrong and Buzz Aldrin on the moon.
Virgin Galactic founder Richard Branson crossed the boundaries of the Earth’s atmosphere on July 11, ahead of the former CEO of Amazon in what appears to be a duel between the empire in space. Bezos, 57, however, insisted that “this is not competition.” “The first person to reach space was Yuri Gagarin, and that happened a long time ago,” he told NBC, referring to the Soviet cosmonaut who made the first manned flight into space in 1961.
“It’s about building a path to the space for future generations to do great things there,” he added.
Bezos founded Blue Origin in 2000, with the ambition that it could one day build floating space colonies with artificial gravity, in which millions of people could work and live.
The company’s general manager, Bob Smith, told a news conference that the “New Shepard” rocket launched was “just the beginning.”
The company is currently developing a high-velocity rocket launcher called New Glenn, as well as a lunar lander, hoping to secure a contract with the U.S. space agency and its Artemis program, making it the most important private sector. . partner for NASA.
Wally Funk was a member of the Mercury 13 Astronaut Training Project, but she was forced to give up her dream because of the discrimination that prevailed in the 1960s before she finally achieved it.

Water wars in the Arab region..Illusion as reality? | Arab world

Massive spot in social media of iPhone 13, find the reasons

What is the story of the virus that is spreading more and more among children all over the world?

Noma gets his third Michelin star.

An Israeli company is developing a tool to hack iPhones