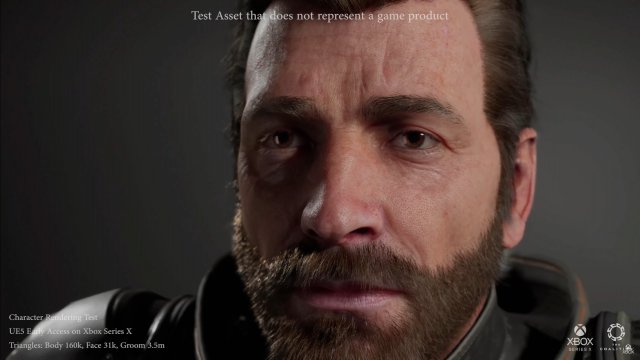 In May 2020, Epic demonstrated for the first time the technical capabilities of the Unreal Engine 5, at that time still in conjunction with Sony’s PS5 console. A year later, Epic announced that early access to UE5 had begun and that a final release was expected in spring 2022. Since then, developers have struggled to attract attention to their creations with the Unreal Engine 5, and Gears developer The Coalition has now joined them.

Character demo: 3,500 triangles for eyebrows only

At the GDC 21 virtual developer fair, the developer of Gears of War showed how closely they work with Epic Games on the subject of Unreal Engine 5. In addition to a lengthy technical reading, two videos were published that were worth watching. on the one hand the UE5 tech demo called Alpha Point, and on the other hand a character rendering test in real time. The focus is on the brilliance on Xbox Series X (and S), but of course some displays also apply to fast PCs. Important to know: The coalition insists several times that they are not showing a “real” game. “None of what we’re going to show is related to a future Gears title or any of the titles we’re working on in-house,” said Kate Rayner, Studio’s technical director at The Coalition.

Rather, it is about “testing the Unreal Engine 5, giving Epic feedback and working closely with them”. The goal is to make sure that the engine is optimized for Xbox and Microsoft platforms and that it meets the requirements you have for the internal title. This includes evaluation of the Megascans texture library, but also the two key UE5 core technologies Nanite and Lumen test and the performance on Xbox Series S | X test. All assets were created specifically for the Alpha Point tech demo. 90% of these assets were built by The Coalition and 10% are megascans. This demo was recorded live from the Xbox Series X.

Colin Penty, Studio Technical Art Director at The Coalition, explains that the demo will be performed in 4K with Temporal Super Resolution, UE5’s new upscaler. Internally, the input resolution is around 1080p to 1440p and the scene contains more than 100 million triangles. After a few tests with very high polygons, you end up with an average number of triangles of 300,000 to 500,000, which is about 15 times the average Gears 5 asset – “a huge boost,” says Penty. Assets such as beard and hair are 250 times higher than Gears 5. Hair has 3.25 million triangles, beard 240,000. The lashes alone have 3,500 triangles, and that’s the budget for a full Xbox 360 character now contained in the lashes of one of these characters. No wonder the conclusion of the technical conversation is: “UE5 games on Xbox Series X and S will look great”.

Supports PCGH – it only takes a minute. Thank you!

All readers receive daily free news, articles, guides, videos and podcasts about the latest game hardware and their favorite games. So far, we’re mainly funded by advertising, but since COVID-19 it’s getting harder and harder. Many companies are cutting or cutting their advertising budgets for 2020. Budgets that we unfortunately have to rely on if we want to continue offering PC games hardware in the usual form for free.

For this reason, we turn to you now. As a PCGH supporter you can support us so that we can offer our well-known content in the usual form for free. Every contribution, big or small, is valuable. Supports PC Games Hardware – it only takes a minute.

We thank you in advance.

[PLUS] FidelityFX Super Resolution (FSR) in a practical test

PCGH Plus: Finally, the upscaling of AMD FidelityFX Super Resolution (short FSR) in some games may be investigated. FSR differs from DLSS in approach and outcome. We have tested it extensively. This article is from PC Games Hardware 08/2021.
more …

The links marked with * are linked links. Affiliate links are not advertisements, as we are independent in researching and selecting the products presented. We receive a small commission for product sales, which we use to finance part of the free content of the website.

Apple A15 Bionic 55 percent faster than its predecessor

Autumn blues and winter depression: ways out of the low mood – WORLD