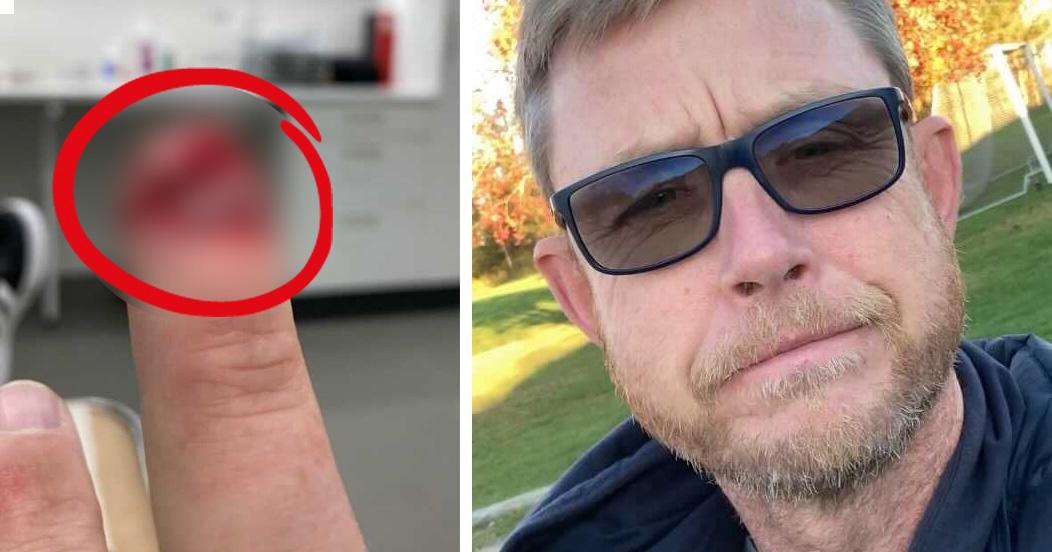 Published: Less than 2 hours ago

Updated: Less than 2 hours ago

An unlucky morning led to Staffan Lindberg amputating part of his finger.

But its narrow detour meant that the insurance did not cover the damage.

– It feels frivolous, he says after the decision of the insurance company.

Warning: Later in the article, an unedited image is on your finger.

On the way to work, teacher Staffan Lindberg realized that he had forgotten his job keys.

He drove to the sports field, where he had forgotten them the night before after holding a football practice. But bad luck came more than once this August morning.

When Staffan Lindberg crashed on the sports field, he had to get out of the car and pick up a roadblock to step on.

Bam, it said then, and then the tree hit his hand and almost one of his fingertips almost guillotined.

Went to the hospital

A photo from the day of the accident shows how the fingertip is completely blue and has a large jack that goes straight through the nail and divides the finger in two.

– Our sports teacher who worked in health was on site and said “you go straight to the hand surgeon”.

Staffan Lindberg took the sports teacher’s advice and went to the hospital where the doctors sewed the fingertip.

This was followed by a shorter sick leave. He expected to receive compensation from the insurance company Afa, with which he, like most employees, is insured through work.

– But when I brought this up with Afa, they said the insurance was not valid because I had deviated “from my normal route”.

The sports field where Staffan Lindberg picks up the keys is on its way to the workplace and the “detour” is, according to Afa, the meters he walked between the car and the roadblock.

In the decision of Afa, which Aftonbladet has read, they state that Staffan Lindberg is not entitled to compensation despite the fact that he has appealed.

– If I had changed tires and pinched my finger on the road, I was assured. But if I had taken the car aside earlier, it probably would not have been.

– It feels frivolous, you take every opportunity to avoid help as payments.

“It’s about what hat you have”

Per Winberg, training manager at Afa, says that they never comment on individual cases, but that the assessment is about what role they had when the injury occurred.

– We’re usually talking about what hat you’re wearing. If you wear your private hat, it does not matter if it is almost on the right route, says Per Winberg.

But if you have forgotten your task keys, why not make sure you are safe when you turn around to pick them up?

– If I have forgotten my access card for my workplace, I do not have to make a detour, you still have to take the regular route.

Shouldn’t there be room for a little margin in your reviews?

– I want to say that the conditions have quite a margin. There’s an assessment month anyway. Like I said, it’s not about how many meters, but what this causes.

Can you understand that it sounds a bit narrow not to deviate a few meters?

– You do not necessarily have to accept it. You can have different views.

The lawyer: “Understand that it may seem unreasonable”

Jenny Sparring, a lawyer with a focus on personal injuries at Konsumenternas försäkringsbyrå, understands that Afa’s decision may seem like an unreasonable interpretation.

However, everything seems to have gone well, she says.

– This is an occupational injury insurance and somewhere they have to draw the line. What we always emphasize is that the customer must always make a clearly motivated decision. It’s probably a reasonable assessment that has been made.

What should you think about to feel safe from and to work?

Staffan Lindberg has now filed a second appeal and is awaiting a decision from his private insurance company. Otherwise he feels good, even if the finger is sometimes haunted.

– I will become permanent, but said the doctor. When it gets cold, I get a excruciating pain.

Staffan does not buy Afa’s explanation and thinks they should evaluate their terms.

– In general, I invest the money. But I think a lot of people in Sweden do not know this. I hope Afa changes his rules. It’s totally sick.

If you would like your case to be re-examined, you should write by e-mail or letter to the insurance company requesting a “re-examination of the decision”.