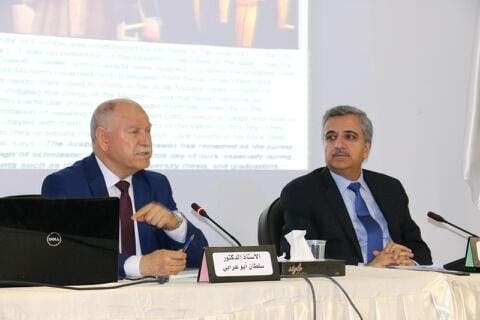 The meeting was moderated by the Arab Thought Forum secretary-general. Mohamed Abuhmour, who in his presentation emphasizes that the problems of education and higher education are the most serious challenge to the ability of education systems to provide sustainable development with the elements of human sustainability and the ability to deal with technology in the era of a fourth industrial revolution and beyond; Traditional education requires skills based on creativity and imagination, critical thinking and mobility of the cause, and asks the link between technological development, investment incentives, public-private partnerships and communities based on communities. , Stressing also renders everyone's responsibility in creating an appropriate exit environment compatible with the requirements of the development and transition to a product of the society and the knowledge-based economy.

He said d. Sultan Abu Orabi said in his lecture: The population of the Arab countries is about 400 million people, 60% of whom are under 25 years of age. This large population growth accounts for 50 million jobs in 2030. The number of students at Arab universities is more than 15 million The proportion of women among them is more than 55%, while the percentage of illiterates in & # 39; The Arab world is about 60% and women make up two-thirds of this ratio, while the unemployment rate among young university graduates is currently 30%.

He added d. Abu Orabi said that the quantitative expansion of higher education into the Arab countries is being compensated by qualitative delays in & # 39; Most of these countries, especially in comparison with Western industrialized countries and Southeast Asian countries. He pointed out that higher education and scientific research have many major problems and challenges, priorities and strategies of scientific research, not enough time, little funding, lack of awareness of the importance of good scientific research, lack of opportunities and databases for networks, limited international cooperation, and the migration of Arabian brains to Western countries.

He said the contribution of "Arab countries" (22 countries) was in & # 39; a global scientific publication is no more than 0.3% of global publication, while we find that Israel is publishing & # 39; publishing an Arab community, and the proportion of EU countries is more than 34% of scientific publications, and sharing the United States of America is 31%, which is a strong indicator of the lack of willingness from & # 39; an Arab region to compete in the 21st century, as well as most of the published Arab research is non-scientific and unapproved research, but research in & # 39; e humanities and social sciences, and published in local Arab journals It has no significant consideration in any global influencing coefficient and the kb section T of this scientific study published with researchers and foreign scientists.

And touching d. More than 35% of all Arabic competencies live in different squares in Diaspora. Research shows that 54% of Arab students study in western universities They have no desire to return home for many political and social reasons, incentives and salaries, and weak research center infrastructure in Arab countries.