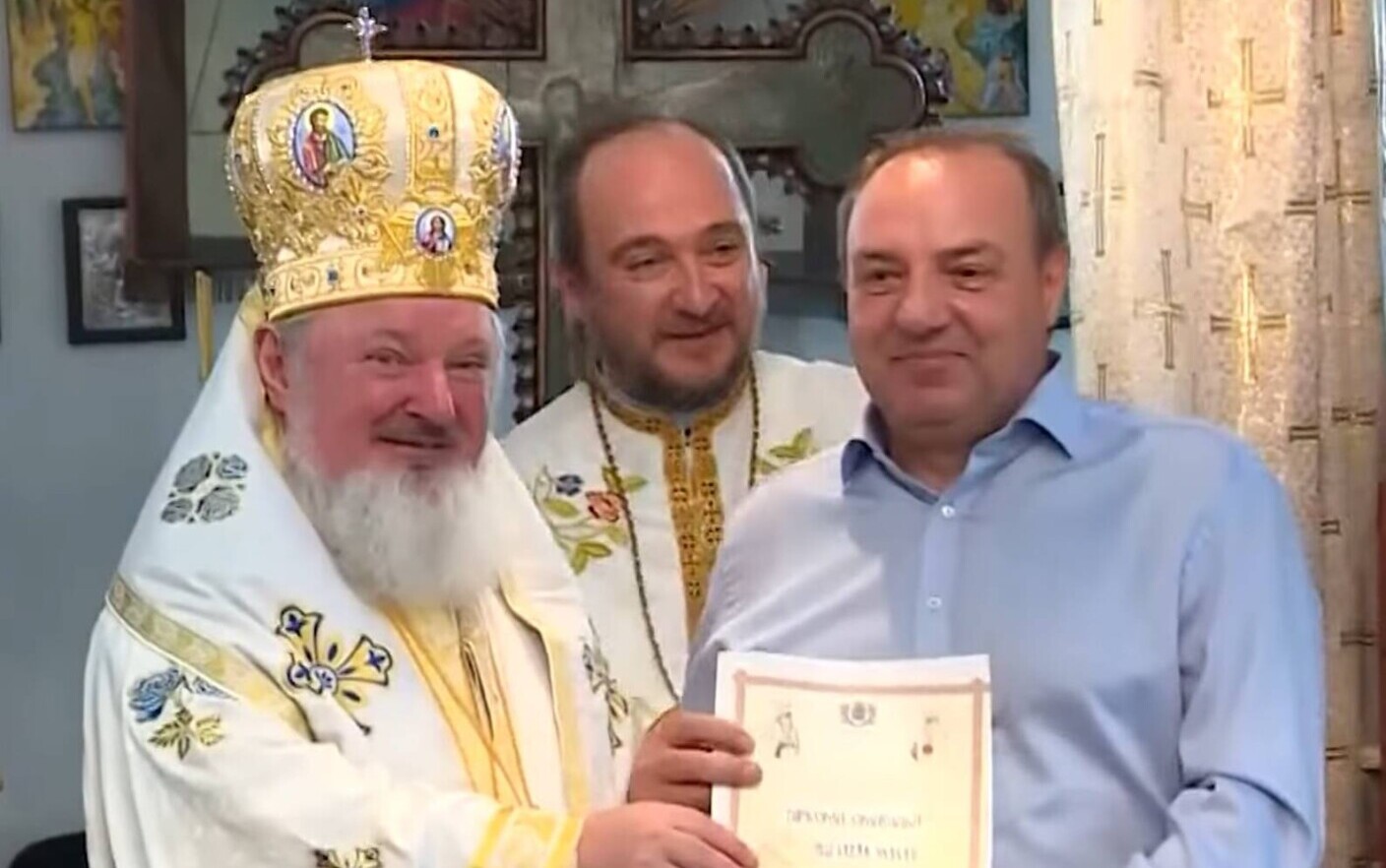 The Archdiocese of Bucharest sent a press release on Wednesday rejecting all the conclusions reached by the journalists of Recorder in the journalistic investigation “White Clan”.

So rejected church representatives the statements of journalists, who claimed that “no one knows how the Church manages such sums of money“Say that”the allocations of public funds are checked annually by the competent state institutions and comply with a clear legal framework”.

Moreover, to clarify the issues that appeared in the video footage of the journalists, “an investigation will be conducted “ at the Archdiocese of Bucharest by the representatives of the Patriarchal Administration.

That of Recorder presented, at the end of eight months of documentation, “A secret network in which businessmen, politicians and prelates of the top of the Church work hand in hand in a mega-enterprise: the construction and rehabilitation of churches with public money.”

”All this network works with the blessing of the most powerful man in the Romanian Orthodox Church, who calls his people The Great White”, say journalists as well.

Press release from the Archdiocese of Bucharest:

As a result of the publication on the Recorder website of a video material entitled “The Great White Clan”, the Archdiocese of Bucharest wants to provide some clarification on some of the questions contained in this press material.

The material is built with the obsessive intention of transferring to the Romanian Orthodox Church and His Beatitude Patriarch Daniel, the possible guilt of some employees of the church board and some so-called makers of the institution of the Archdiocese of Bucharest (politicians, businessmen, etc. .), which he could gain personal benefits by simply joining important people by committing an image abduction.

The “independent” journalist, without credibility, by the way he constructed this material, uses the tactic of inoculating a great deal of suspicion among people who have no clear idea about the complex and diversified activity of the Romanian Orthodox Church and religious denominations in general, activity with enormous social benefits to the community. It is criticized, on merit, the good management of money in the Church, does not speak at all about the return of this money in its extensive social-philanthropic work.

Can we ask ourselves, quite justly, what the lofty and benevolent moral reason is from the perspective of the author of the material on the Church? What is the ultimate true purpose of the material? The history of the Recorder’s reporting to the Church clearly points to a mass anti-clericalism, a phobia of the Romanian Orthodox Church.

In the material, the funding of the Church and of the religious sects is essentially attacked, implicitly and treacherously conveyed that this funding is a waste of public money. We mention the fact that the financing of the churches of any religious cult by the Romanian state is absolutely legal.

The statement of the author of the material: “Nobody knows how the Church manages such sums of money” is deliberately false and poisonous, given that the allocations of public money are verified annually by state authorities and comply with a clear legal framework (Government Ordinance No. 82/2001 and GD No. 1470/2002), the author deliberately ignores the results of the exemplary church administration under the coordination of His Beatitude Patriarch Daniel.

The request for the blessing of the patriarch is natural, because it is approved by each head of an institution for works that are pre-checked and only approved if they are legally correct.

Theoretically, of course, it is possible an attempt to offend by evil people, whether they are employees of the Church. Once their bad will or involvement in something reprehensible is proven, they are and will always be sanctioned and removed because they compromise the Church. No act of corruption should be tolerated in an institution, especially in the Church.

In this context, Mr Lazăr Neacșu’s statements are untrue and irresponsible, and advise, for example, absurdly, “deputies of the patriarchate”. Regarding his statement regarding his political affiliation, we specify that His Beatitude Patriarch Daniel was never once encouraged to become a member of a political party because the Patriarchate is politically neutral.

Regarding SC Solid System Solution SRL, represented by Mr Marius Iorga, who states in the video that he receives funds for churches, we specify that, after some internal research has been done for reasonable reasons in connection with the documentation submitted for the auction and which led to the conclusion that the bidding process had failed, the company was disqualified, with the prohibition to participate in auctions organized by the Archdiocese of Bucharest or to contract new works at each cult unit, for a period of 12 months, starting from August 17, 2021 (almost two months before the publication of this material), aspect communicated to all religious units in the diocese.

The same measures have been applied over time to other companies that have tried to intervene illegally in the procurement procedure.

At the same time, we remind you that, in order to avoid possible irregularities in the management of funds, on the occasion of the works carried out at the cult units, the Archdiocese of Bucharest applies for a wide range of administrative and technical procedures for several years, as follows:

3) The cult units of the Archdiocese of Bucharest have an obligation that the payment for the construction or repairs (restorations) of churches or church buildings of any type, as well as for the paintings or restoration – preservation should not be made in advance, but only based on correctly prepared work situations; violation of this provision is sanctioned with the dismissal of the parish priest, respectively the abbot (abdis), in the case of monasteries. The site administrators who approve the work situations are also legally liable for any irregularities in their activity;

4) The sums of money received by the church units of the Archdiocese of Bucharest for construction and repair works, paintings, etc., from public funds (from local or central budgets of public institutions), are spent exclusively through the use of funds non- cash payment (bank order; payment for accepting merchants, with a bank card attached to the current account of the church unit); the use of cash payments is strictly prohibited, the violation of the decision with the effect of sanction of the dismissal of the responsible person;

5) Any request for funding from public funds shall be made exclusively upon obtaining the written approval of the diocesan center; the representatives of the church units who submit funding files of public funds, without first obtaining the approval of the diocesan center, are administratively sanctioned, from the written warning, until the dismissal from office;

6) For works with a value of less than 100,000 euros (regardless of whether or not there is funding from public funds), a selection of offers is organized at the level of religious units;

7) For works with a value of more than 100,000 euros without VAT (regardless of whether there is funding from public funds or not), although the legislation does NOT oblige us to organize tenders, for reasons of transparency and financial discipline still organized at the Diocesan Center, following an internal procedure, which violated part of the provisions of Act no. 98/2016 on public procurement:

a) prior approval of the specifications (Sector Church Monuments and Structures – MCB);

c) the announcement of the date of the organization of the auction in the diocesan center on the website of the Archdiocese of Bucharest and by e-mail;

d) presentation of the offers in sealed envelopes at the Diocesan Center;

e) opening the envelopes in the presence of the bidders and representatives of the diocesan center (Economic, Monuments and Church and Legal Sectors);

f) by assimilation with the public procurement legislation, we use in the opening of the tenders within the tenders a standard report that complies with the provisions of order no. 1581/2018 on the approval of the standard forms of the interim evaluation minutes in connection with the procedures for the award of public contracts;

g) designation of the winner within 15 days.

8) In 2019, by decision no. 6332/2019 the Holy Synod approves the Regulation of the Administration of Church Assets. The scheme was communicated free of charge to all religious units in the Romanian Orthodox Church and includes rules on the fair and transparent use of funds from own funds as public funds;

9) The Archdiocese of Bucharest does not accept the attitude of corrupt clergy. If there have been shortcomings in honesty, sanctions and measures have been taken; therefore, a negative image should not be created of all other clergy working well.

The Archdiocese of Bucharest, through the years implemented measures, prevented and took measures to rape the clergy who worked wrong.

We are convinced that, regarding the works carried out on many churches within the Archdiocese of Bucharest, we have tried to identify the most transparent, accurate and efficient procedures, which will guarantee durability, execution dates and the lowest price. The procedures approved by the archdiocese are correct and efficient, specifically for legal persons under private law, as there is no normative act or contract in which the Romanian state undertakes the expenditure of these purposes in full or in a certain percentage. to wear. Depending on availability, some public institutions with responsibilities in the field of cult support may provide financial support. “