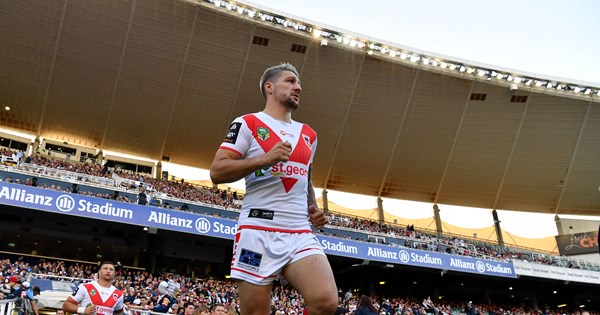 St George Illawarra captain Gareth Widdop is set to leave the Dragons at the end of next season for the chance at a "fairy tale" end to his career in England.

The England playmaker, who was on a scholarship with Halifax before moving to Melbourne with his family as a teenager, told St George Illawarra officials of his passion to play in Super League while still at the peak of his game.

Widdop, recovering from shoulder surgery that sidelined him from the recent test series defeat of New Zealand, turns 30 in March and wants to move to England next season or in 2020.

He is contracted to St George Illawarra until the end of the season 2021 but it is expected that the club will release him from the final two years of the deal to return to England.

A number of Super League clubs would be keen on Widdop's services if he was available but it is unlikely to have the money to accommodate the signing of a player of his standing for next season, with Huddersfield telling reporters in England they were not in position to make an offer now.

Leeds, who is coached by David Furner, may be an option and has recently signed former St George Illawarra forward Trent Merrin after he was secured a release from Penrith.

Widdop has played 185 NRL matches for the Dragons and Storm but has repeatedly stated since making his debut with Melbourne in 2010 that he wanted to play in Super League and told reporters while in England for the 2015 Test series against the Kiwis that it would be a "Fairy tale to end my career here".