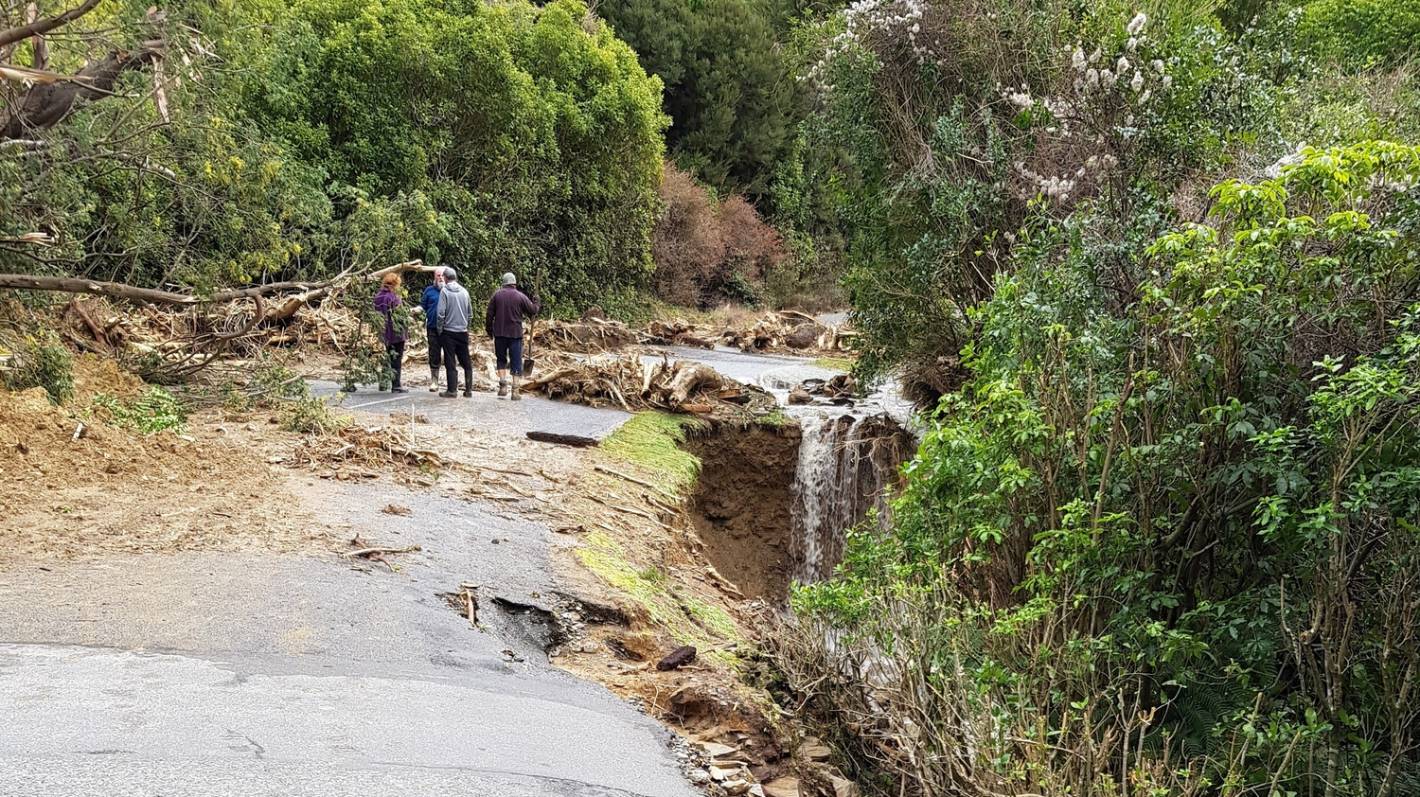 Many Marlburians are still stranded after this weekend’s flood, including these residents on Queen Charlotte Drive.

Residents of a rural valley cut off from the rest of Marlborough by rising waters have helicopters on standby in case they need to flee their homes.

Homeowners in Marlborough’s Waihopai Valley are expected to be isolated for at least a week if the only way in and out of the settlement – the Māori Ford Bridge – is washed.

But with a doctor living between the small cluster houses, they are ready to ride out the storm at home.

READ MORE:
* Wairau Valley couple tell about waking up to a river around their house
* Couple runs for her life to escape wall of mud smashed into her house
* Brutal weather system causes chaos across Marlborough

“We will try to work out a plan in the coming days, see how it goes and how we can deliver postal and freight services to people,” he said.

But they were not the only Marlburians stranded by the torrential rains that wreaked havoc in the region on Saturday and Sunday.

Slips on Queen Charlotte Drive, a scenic Marlborough Sounds road between Picton and Havelock, had residents cut off as well.

Speaking to the Express by email, because their landline and cell phone were mobile, Moenui Bay resident Lisa Clem said she and many other residents felt “forgotten”.

“We have had no contact from council, civil protection, no mention of our need by the deputy mayor on radio or television.

“We have been torn down by a lot of slugs along the [Queen Charlotte Drive], our water supply has been washed. We do have power, thank you Marlborough Lines, but we certainly feel forgotten. Does anyone know we’re here? Clem said.

Marlborough deputy mayor Nadine Taylor said on Sunday that the council had understood that some people in areas that had been demolished would feel vulnerable, but knew that the “farming and sound communities are resourceful”.

Many local roads were still closed or had only limited access for residents and emergency services, Taylor said.

“The key message is that travel on Marlborough Sounds and some rural roads should be restricted to essential movements.

“It’s crucial that people drive and care for the conditions,” Taylor said.

Northbank Road was also closed along the Bartletts Creek bridge. Fortunately, the bridge was not lost as previously reported, but there was a major outage in the road next to the bridge that prevented access. There was also damage on Onamalutu Road.

“The Awatere Valley Road has also been seriously affected by a major washout and could take a lot of time to repair.

“There are a number of farms on that road that we believe have limited access.

“The emergency response has been an enormous effort by many Marlborough based agencies, organizations, iwi and individuals,” Taylor said.

If someone needed essential supplies and could not access them, they could contact the council’s Customer Service Center at (03) 520 7400, or call 111 in case of emergency.

An update from council council said Sunday’s rain was short-lived and likely would not cause any problems.

Flood events on the Wairau River required six to 12 hours of high-intensity rainfall to fully develop. The forecast for the rest of the week on Wednesday included a small rainstorm that could total 20 to 40mm on the Richmond Ranges before turning south.

It was unlikely to put pressure on any of the areas concerned during Saturday’s storm event, where more than 300mm of rain fell on the Richmond Ranges.

Advice for people back home: https://www.nmdhb.govt.nz/nmdhb-news-and-notices/category/nelson-marlborough-public-health

SH1 is open; there has been some traffic backlog, but this is clearing

SH63 is expected to be at least a few days away from the opening, with the least damage on the Blenheim side of the Wash Bridge

People should not attempt to travel along Queen Charlotte Drive unless necessary; and the road between Moenui and Havelock is closed

Kenepuru Road is still under consideration; there is a 5km slip in from the Linkwater exit