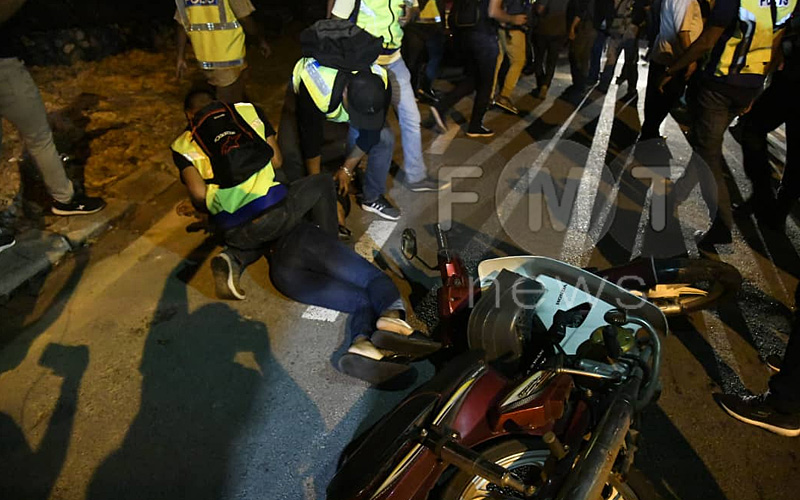 KUALA LUMPUR: Prime Minister Dr. Mahathir Mohamad today expressed regret over the violence at the Seafield Sri Maha Mariamman Temple on Monday, stressing that the government does not take the disturbance lightly.

Mahathir told the Dewan Rakyat today the serious physical injury inflicted on a fireman and damage to public and private property due to irresponsible rioters could not be taken lightly.

"As was explained by the home minister, what happened at the temple is a criminal act by irresponsible quarters. The issue of racism or religious strife does not arise at all.

"In a criminal act, all those who are involved, whether directly or indirectly, or those who mastermind the incident, or those who try to take advantage of the situation, will face action based on existing laws.

"The government does not take such incidents lightly, as it could lead to bigger problems involving peace and harmony among the races," he said.

Mahathir (PH-Langkawi) said he had been briefed on the latest developments in investigations into the incident, as well as follow-up action by the authorities.

"I am satisfied and I thank the police who have been acting to control the situation from spreading elsewhere. However, any action taken against anyone should be fair and fair, "he said.

Mahathir said the country was now helmed by a government that only took over the leadership, and there were weaknesses that some quarters would like to jump on.

However, the Pakatan Harapan (PH) chairman said this could be overcome if the people understood the background of such incidents and did not rely on rumours.

"It is important for us to realize that the country's security and stability are our joint responsibility. Let's work together to protect this peace.

"I urge all quarters to take any action or issue any provocative statements that can lead to dissatisfaction among others.

"Let's leave this matter to the authorities, and ask all quarters, whether in this house, or even the public, to be careful when issuing statements or sharing any other news on the incident.

"At this juncture, there are already many false and inaccurate news items being shared," he said.

Mahathir also urged politicians, along with leaders of NGOs with vested interest, not to make the situation worse.

While the government did not intend to restrict the freedom to speak, he said it would not hesitate to act if what was voiced was untrue and threatened public security.

"The government has promised not to impose restrictions on reporting and communicating, but this freedom must be used responsibly and not from the flames, which could lead to division and jeopardize harmonious relations among the races," he said.

Mahathir added that now it was not the time to play the blame game, saying those who were wrong would face the full force of the law.

"I want to stress, it is not the government's intention to blind anyone, but democracy has its limits and we must understand these limitations.

"No one can act as they like, against the law, and create uneasiness among the people and unrest in the country.

"The right and the freedom to speak does not mean that one can just say something provocative towards the sensitivities of others."

He reiterated that the incident was not a racial or religious one, but a criminal act that should not be allowed to tighten and damage relationships among the races in the country.

"I ask for all Malaysians to remain calm and avoid becoming involved in activities that can be a catalyst for instigation and incitement.

"If there are any provocative actions, the government will take stringent action against those who try to challenge the nation's laws.

"We must remember that this country is our responsibility," he adds.

Following the ministerial clarifications made by both Mahathir and Home Minister Muhyiddin Yassin, the emergency motions filed by Fahmi Fadzil (PH-Lembah Pantai) and Ronald Kiandee (BN-Beluran) to debate the issue in the lower house were denied.