Doctor: PCR test “does not pierce the brain”, but certain sensations should make you anxious

“A molecular test that detects viral genetic material (RNA), commonly called a PCR test, is performed in laboratories to indicate if a person is infected with the virus at the time of the test and if they have a potential carrier.This is one of the most discussed methods for COVID-19 virus detection, which has probably been tried by the majority of the Lithuanian population.

Wooden or plastic thin sticks with a swab attached to the tip are used to test the nasopharynx. Although it is one of the most common research methods, it causes great anxiety for a part of the population: during the test, the blood-brain barrier is broken, DARPA hydrogel is implanted, the brain is broken through, and so on. said the doctor.

Here, too, he shares a review scientific article in one of the most prestigious journals for nasal diseases in the US, and reviews all adverse events related to PCR tests described in scientific articles and also published in the US MAUDE (Consumer and Producer Rights Protection) system.

“A total of 129 adverse events were assessed. Of these, 63 were from literature reviews and 66 were published through the MAUDE system. The most common complication during the test was fracture of the rod and retention in the nasal cavity as a foreign body (47%). This was followed by epistaxis (17%) and headache (11%).

2 cases of meningitis with bone damage between the nose and the brain and cerebrospinal fluid stream were also reported. In 7 cases (12%), when the stick remained in the nose, general anesthesia was needed to remove it, in 1 case (5%), due to severe bleeding from the nose, surgical intervention was also required, “said D. Rauba.

According to him, this is clear evidence that although this study is applied very widely, dangerous complications are very rarely detected.

“If this test is performed by trained personnel – there are almost no complications, so if you are afraid of vaccination, do not be afraid to test,” the doctor wrote.

Has not received any patient complaints

When the portal tv3.lt contacted the doctor, he told me in the second year how long the pandemic lasted, without having such cases when the patient needed help in case of complications after taking the PCR test.

“There were no cases where it was necessary to pull something into the operating room or stop the bleeding. Therefore, I emphasize that this is very rare. Of course, maybe if these symptoms didn’t bother me much, how much my nose remained, then people just didn’t get around, “said D. Rauba.

He made no secret of a known case in which the septum of the brain was damaged during the investigation.

“But the man had a congenital defect – there was no bone between the nose and the brain, they had partially fallen into the nasal cavity. But even that, if the test was done correctly, you would not be there. have come, because that stick has to hit a lot somewhere, like a perverted nose septum, or has to go straight up. 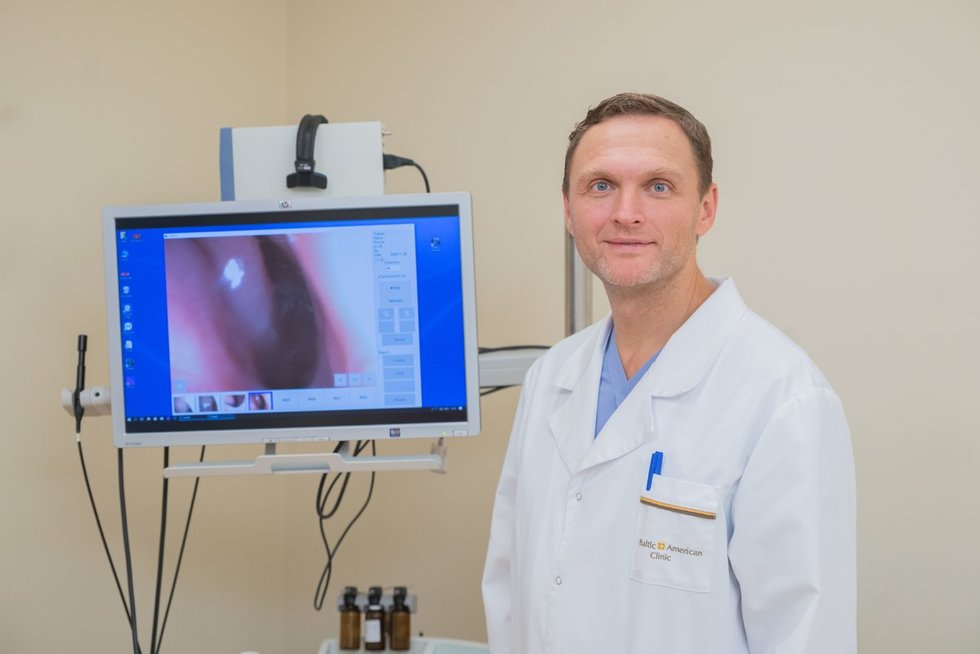 In this case, you have a very straight angle, not only to touch the top of your nose, but to break those dice with force. Because when we do surgery, there are complications that we damage the brain wall, but we use sharp metal instruments. And a thin stick, even if it hit a dice somewhere, would bend and go to the base of the skull, but would not get into it. It is necessary to do a very ignorant examination, to float the top practically upright, not along the bottom of the nose, to avoid complications, “said D. Rauba.

More congestion – for those with a nasal septum

The doctor pointed out that another option why there may be uncomfortable feelings or complications during the examination is if the nasal septum is deformed.

“There are cases where the nasal septum is deformed, people complain that there has been more blood from the nose for a while. This is the case when one side of the nose in particular is narrower. And if it is often necessary to conduct an investigation, the fact that there are abrasions of the mucous membranes, bleeding, which normally stop at home, “said D. Rauba.

If a person complains that every time they take the test, there is pain on one side of their nose, the interviewer advised to visit a LOR doctor.

“In this case, it is necessary to investigate – it is possible that there is a very deformed septum, bone or cartilage disorder. This must then be corrected if, if a test has yet to be done, no sample is asked. from one side, ”said the doctor.

The solution – a test of saliva?

Asked if the solution in such cases might be COVID-19 saliva tests performed in the country’s laboratories, Rauba agreed that this would be a possible solution.

“Only, as I understand it, PCR of the nasopharynx is considered to be the most reliable and most widely used. If it were possible to use saliva samples, as students do elsewhere, it would greatly reduce the risk of these risks, “he noted.

The interviewee said that everyone would want such a study to be both reliable and non-invasive. At present, a PCR test does not prevent certain risks of the nasopharynx.

“If the mucosa is constantly damaged, adhesions can also occur. At the beginning of the pandemic, in general, those sticks were thick enough to insert so easily. Even more so, if the test is taken incorrectly , the nasal septum, the side walls of the nose can be scratched, and can form adhesions, stick together.That is the fact that this is not a pleasant study and can have complications, although, as I mentioned, their frequency is really low , ‘remarked the doctor.

At the same time, D. Rauba added that those who have blood clotting disorders, bruises or hypertension should also be more careful when taking such a test.

“Then it’s enough to blow your nose harder and you can start bleeding. It’s a fact that a smear is taken regularly, the fact that the nasal mucosa is more traumatized,” he said.