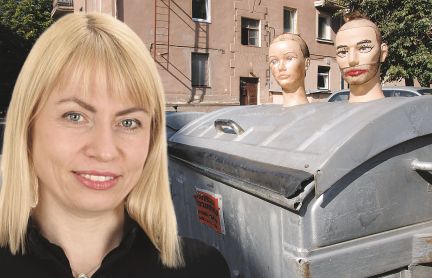 Vakaro žinios has already announced that waste will be discharged to Kaunas and Klaipėda waste incineration plants for incineration from abroad, although this is prohibited by law.

According to him, the Department of Environmental Protection has launched an investigation, but has not yet contacted the prosecutor’s office. According to S. Gentvilas, power plants in Lithuania can burn up to 10 percent. non-Lithuanian waste as tens of thousands of tons. According to the minister, the power plants themselves are not to blame for this, with the documents being falsified by intermediaries – about 20 companies transport waste to the Klaipėda thermal power plant and about 15 to Kaunas.

“Understand that waste can be cleaned and recycled here in Lithuania, but instead of cleaning and recycling into new products, it is simply incinerated. This is probably the scheme, “S. Gentvilas explained to Vakaro žinios.

It turns out that waste can be imported completely legally in Lithuania from other countries. But only as secondary raw materials – for processing. In Lithuania, however, these “secondary raw materials”, after “adaptation” of the documents, become “Lithuanian”, which can be incinerated or disposed of in landfills, because in our country both incineration and landfill are the cheapest in the whole region. .

Why is waste legally allowed in Lithuania? Do we even have too little of it? And will the recent scandal not be conducive to increasing incineration and waste taxes? Vakaro žinios addressed these issues to the Deputy Minister of the Environment responsible for waste management Raminta Radavičienė.

It turns out that the ban on the import of waste from abroad for incineration and waste has been adopted by the Seimas, and we have no right to ban the import of waste completely due to European legislation prohibiting restrictions on the free movement of guod. After all, according to the EU, rubbish is also a good thing because it can be recycled and made into useful things – substances and so on.

“It is declared that waste destined for recycling travels from abroad. However, our economic entities manage in such a way that only a part of waste is recycled, the rest goes to combustion power plants,” stressed R. Radavičienė.

According to her, the Ministry of Environment proposes to increase taxes on waste incineration and landfills – so that it is not worth the effort to transport waste from abroad to Lithuania.

“Now the waste compensation in Latvia is 61 euros per tonne of waste, in Poland – 65 euros. With us – 10 euros. Estonia plans to increase the fee to 90 euros next year. Latvia has no waste incineration plants at all. Such a situation. And what comes out of it?

If, due to high waste taxes, such waste is an expensive pleasure for neighbors, and there is a certain amount of non-recyclable waste, then there is a need to find out where waste can be disposed of more cheaply.

We do not want to become cheap land for waste treatment, so the ministry will propose to increase the fee for waste to 50 euros per tonne, “the deputy minister explained.

Why increase waste and incineration taxes when it is not legally possible to transport foreign waste from landfills to incinerators or incinerators? Maybe you just need to strengthen controls? According to R. Radavičienė this is not enough.

“The element of cheapness would disappear – the incentive to bring waste to Lithuania. “If the fee were higher and we equalized the prices of waste management with other countries, it would no longer be worth the effort to try to circumvent the law,” said the Deputy Minister.

The speaker assures that a 5-fold increase in the waste compensation does not mean that residents will pay 5 times more for waste disposal.

“It’s popular to say so, but it’s a cheap trick. Landfills are objects that need to be forgotten soon.

The state invests in infrastructure through which waste can be processed before it reaches the landfill. I’m talking about containers, places where people can transport waste, packaging, textiles, separate storage and treatment of food waste, and so on. There are all the conditions that would allow municipalities to boycott waste that enters waste after using the available infrastructure. Higher taxes would be an even greater incentive.

It is necessary to see who is not using the capacity, because the awareness of the population in sorting the willingness of the local government is greater to meet the expectations of the population. We can not live between the mounds of landfills, “concluded R. Radavičienė.

Commented by Rimantas BRAZIULIS, Member of the Council of the Lithuanian Green Movement:

I believe that the directive banning the shipment of waste from abroad was “passed on” by large industrial companies – so that it would be cheaper to dispose of the generated waste in smaller countries. That even three companies are needed for waste incineration – in Vilnius, Kaunas and Klaipeda. Although it was clear that he would take the rubbish, for example from the same Finland, and burn it in Lithuania.

Once upon a time, the Finns had built car shredders in Klaipeda, transported tens of thousands of cars by ship, shredded them and transported the resulting waste to our landfills. Because in Finland, waste taxes are several times higher. It even pays out with shipping and shipping costs. And the metals were brought back to Finland for recycling.

I do not know if that equipment still works now. It is very likely that it still exists, and the waste is not transported to landfills, but incinerated, because the Fortum of Klaipėda belongs to them.

Trash has always been in the interest of the mafia. Trash is inevitably generated, enormous amounts of money circulating in this area – not just in Italy, but everywhere. Politicians just push – make decisions that benefit those who pay the most.

When we started building power plants in Klaipeda and Kaunas, it was already clear that we would not have enough waste to operate at full capacity. And it was clear that in this case the trash would be brought from abroad.

Countries that have real governments, which we unfortunately do not have, encourage their own companies to send waste to semi-civilized countries like Lithuania. Builds factories here and transports trash.

There is really no shortage of environmentalists with us to monitor the situation. However, the beginning of a corrupt system was given when we built factories with capacities several times higher than our waste. If our controllers now start catching something, they would fly out of work immediately.

Why is the Minister out of control? Because he would step up immediately.