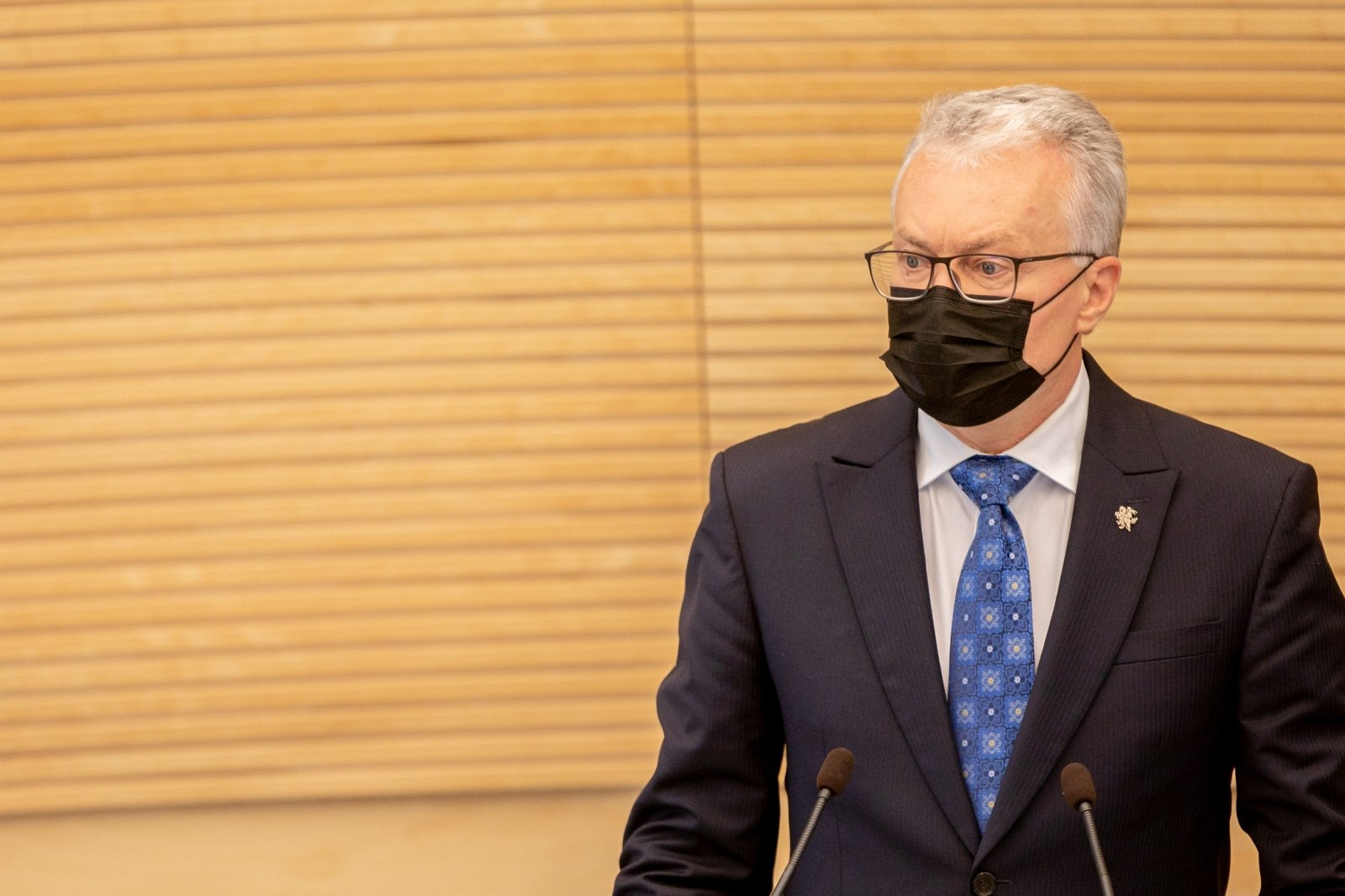 D. Višinskienė is one of the judges of the panel of the Supreme Administrative Court of Lithuania (SACL), which took a resonant decision that the portal violated data protection rules, as in one article on municipal public procurement the identity of the purchase participant was indicated.

Following this decision, SACL chairman Gintaras Kryževičius began a review of the case. As the chairman himself said, he was not convinced by the arguments of his colleagues’ decision. And in this context, the opinion on the promotion of D. Višinskienė was soon expressed by politicians. According to some, in case of new circumstances and doubts about the decision, in which D. Višinskienė also the Administrative Court of Lithuania is a suitable judge.

In turn, such statements and attempts to link the case of “Open Klaipeda” with the promotion of a judge also did not go unnoticed in the presidency. The corridors have discussed whether politicians who speak in such a public way escape the rule of law. Thus, in case of disagreement over the candidacy of a judge in question, the debate can quickly escalate into a dispute over mutual accusations about what is really in favor of a free media like the rule of law.

In turn, the views of the Seimas opposition and the ruling camps are different. The Conservative spokesman makes no secret of the fact that the group’s colleagues are already suspected of appointing the president, and the Social Democrat elder shrugged. Meanwhile, “farmer” Agnė Širinskienė is on the side of the presidency. By the time the presidential candidate reaches the Seimas, the “farmer” assured that he saw an adult conflict, but, according to her, there would probably be no differences over legal issues. A. Širinskienė is convinced that the logic of the political conflict between G. Nausėda and the Conservatives will prevail in the votes over the judge in the Seimas.

Ms Linge: You want to believe that the President also has full information on this issue

Mindaugas Lingė, member of the Conservative faction, admits that the will expressed by the president to indicate D. Višinskienė for the Seimas calls for questions.

“We in the group have not yet discussed this issue, but, as practice shows, in the case of appointed officials, we always have meetings that raise a wide range of issues for candidates,” Elta told the Conservatives.

M. Lingė does not rule out the possibility that the faction he represented in Seimas D. Višinskienės will first ask for comments on the judge’s decision in the Open Klaipėda case, which calls for the resonance. After all, it has made it possible for politicians to understand, the decisions of the panel of judges heard loudly in public space can be a particular indicator in assessing both the professionalism and the suitability of judges for promotion.

“After all, because the Chief Justice of the Supreme Administrative Court of Lithuania has made a decision to hear this case. As you know, the President himself mentioned that this is only the third time in his presidency that such an action has been taken. “This means that this is not just a phenomenon. And this suggests that the decision is not going well. So there may have been some nuances with the issues of competence,” said M. Lingė.

“If the president does not see that these circumstances are important and that they do not question professionalism, it is the president’s decision. This is his right, he does not necessarily have to follow and, as we can see, nominate some candidates. “This may not be selected by the (Judges – ELTA) selection board.” the judges of the Supreme Court.

The presidency’s arguments regarding D. Višinskienė were not convincing

Will the history of “Open Klaipėda” not affect G. Nausėda to appoint D. Višinskienė to a higher position This week, the presidencies asked ELTA. In explaining its position, the presidency stressed that the constitution prohibits specifying how justice should be done.

In response to this position, the Conservatives disagreed with the presidency’s response to the politicians’ critical remarks on the “Open Klaipeda” case and the appeal that it should be possible to propose D. Višinskienė promotions are no more than political pressure on the courts.

“I do not doubt the decision of the court, in a state of the rule of law we must uphold court decisions, not make appropriate comments. I distance myself from that. But the whole story is not just about a case in which politicians really should not interfere. .But it’s about running for a higher position. And the candidacy is being approved by the Seimas. We are politicians involved and we are not eliminated on this issue. We will take responsibility for the decision that is made because we will vote “If this is called politicization, it will be necessary to amend the Constitution and remove the Seimas from the procedure for appointing judges,” said M. Lingė.

Therefore, the politician went on, it is natural that at least the members of the TS-LKD faction will have questions about the candidacy of D. Višinskienė.

“Colleagues are likely to have a number of issues, which will apparently be largely determined by the case, for which the Chief Justice of the Supreme Administrative Court of Lithuania has initiated a review. We still have the suitability of the candidate himself not discussed, but there are serious doubts for individual colleagues, “M. Lingė did not hide.

A. Sys: The president has recently made decisions that do not make the institution more beautiful

Algirdas Sysas, the oldest member of the Social Democrat group, also noted that members of the Seimas may have had questions about the candidacy submitted by the president. The politician did not hide the fact that he found it strange not only to have the court decide the complaint of Atvira Klaipėda regarding the decision of the Office of the Inspector of Journalistic Ethics, but also the attitude of the president to the candidacy of D. Višinskienė to serve in the Seimas.

“I completely agree with colleagues who criticize the work of such judges in the Supreme Court because they constitute legal practice. I think we in Lithuania have been playing with all sorts of secret things. What a secret it can be if it money from taxpayers and someone makes transactions and makes a profit, ”Sys asked.

“How can the use of their money be hidden from taxpayers and the protection of personal data still be addressed,” he added.

Therefore, the Social Democrats, the candidacy proposed by the President and the remarks of the Presidency in arguing this submission seem strange.

E. Gentvilas: I look at the situation impartially, I look forward to meetings and remarks

Eugenijus Gentvilas, chairman of the Liberal Movement, expressed a slightly different opinion on the candidacy of D. Višinskienė. The politician notes that the promotion of the judge proposed by the president would be decided without following the case that caused the agitation. According to him, however, it is logical that the Liberal faction under his leadership will ask the judges for arguments that have led to a decision that is useless for the Open Klaipeda portal.

“I see this situation impartially, I look forward to meetings, comments, we will hear their position. It seems that the panel of judges had the right to make such a decision, that is the conviction of the judges, and so on.” “An interpretation must be respected, even if I do not like it. Therefore, I am not disappointed that she made a decision that I do not like,” said E. Gentvilas.

A. Širinskienė suspects that the reason for the discussion will not be the judge’s decision: the Conservatives continue to attack G. Nausėda

Meanwhile, one of the leaders of the “farmers”, A. Širinskienė, was not so surprised by the candidacy of D. Višinskienė offered to the Seimas as by the fact that the Conservatives associate the nomination of the President with history of the “Open Klaipeda” case.

The politician is convinced that the emerging attitude of the Homeland Union – Lithuanian Christian Democrats (TS-LKD) against D. Višinskienė is simply the result of tense relations between the ruling government and the president.

“I think it is a wish to put the president in his place. Therefore, I am very sorry that the tension that has arisen between the rulers over EVS and other issues following the procedures for appointing judges,” he said. farmer.

According to her, politicians who treat the decision on “Open Klaipeda” as a sufficient reason not to appoint D. Višinskienė before the judges of the Supreme Court of Lithuania simply mention the principles of the rule of law.

“In state rules, politicians usually respect court decisions, but they do not put such pressure on judges. Because in this case, the role of Višinskienė is to make it clear to all courts and judges of all instances that when you make a decision that the rulers “you do not like it, you will be publicly overthrown or lost career opportunities. Judicial decisions, even by instances like this, can be judged in legal ways,” said A. Širinskienė.

“I can not figure out how to do that. If we are really a state of the rule of law,” the politician added.

In summary, A. Širinskienė said that the situation would not change if the Supreme Administrative Court of Lithuania, after reviewing the case regarding the publication of Atvira Klaipėda on public procurement, finally decided to change the previously adopted decision.

“Dozens of court decisions are being reviewed every day in Lithuania. Some of these judgments are interchangeable in other instances. Whether we will now take any case and say that the judge has no prospects, “the politician was surprised and predicted that the” farmers “in the faction should not have questions about the appointment of a judge.

“We are not talking in the group, but at least I would say that the assessment of the individual cases of judges should be very clearly separated from the personality of the judge, especially where the cases are not a single judge, ‘summarized A. Širinskienė.

ELTA recalls that the Constitution provides that judges of the SCL are appointed and dismissed by the Seimas at the suggestion of the President. The President is advised by a special statutory body of judges, the Council of Judges, on the appointment, promotion, transfer or dismissal of judges.

No part of this publication may be reproduced without the written permission of ELTA.

A team of 6 people will imitate life on Mars for a month: they do not even have to climb space