'Sitting and staring in the night sky' Evolving astronomical projections 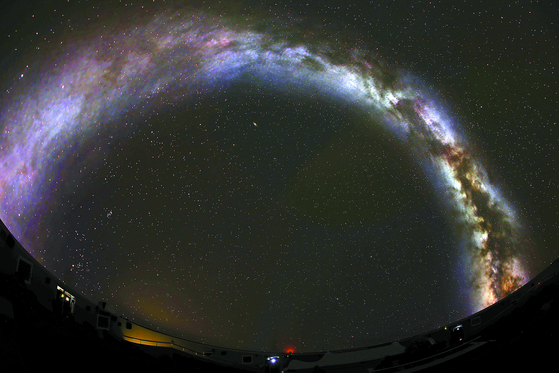 The Milky Way band with both summer and winter constellations. There are always two or three seasons in the sky. A divergent reporter

From the place where the southern sky and the mountains meet, something like a cloud extends to the top of the head. It is a dark night sky, not a cloud. Our planet belongs to a different litter, the Milky Way. Orion is a typical winter constellation with three stars standing side by side in a waist dancing belt. At the end of the northern sky, the Big Bear holds a big dipper like a ladle. The sky is as black as black, and many stars are getting stuck.

It is the 'night sky' of Gwacheon, Gyeonggi Province, which was witnessed on the last 7 days. Of course, you can not see the Milky Way in the suburbs of Seoul in the 21st century filled with light pollution, but there are still places where it is possible. This is the planetarium, which displays the night sky constellations on the inside of the dome building. 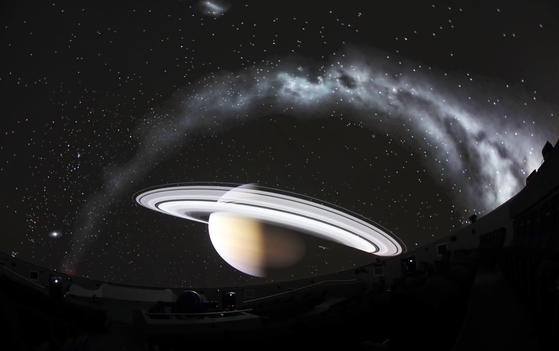 A scene of turning around Saturn using a virtual probe. When you look at the astronomical projection tube, it causes an illusion that you are shooting on a spaceship. A divergent reporter

The JoongAng Ilbo reorganized as an 8K resolution high-resolution digital projector, and visited the Gwacheon Science Museum astronomical projection hall, which will operate from the 10th. The Gwacheon Science Museum, which is the largest in Korea with a dome diameter of 25m and a screen area of ​​981㎡, has rearmed with 6 laser beam projectors with 5000 angstroms. Resolution is four times better than existing facilities. Resolution astronomical images provided by NASA and the European Space Agency (ESA). Thanks to that, I could see more vivid galaxies and many stars than the night sky seen from the world's top space observation environment in Hawaii, Mauna Kea.

"Let the constellations lead to the line." When Park Dae-young, who has been leading the replacement project of the astronomical projection tube, was downgraded, the stars that were shining on the head were connected to the line. The shape of the scoop of the Big Dipper was evident. Then, "Let's show it as a picture," the night sky filled with people and animal paintings. The Big Dipper became the tail of the 'Big Bear'. 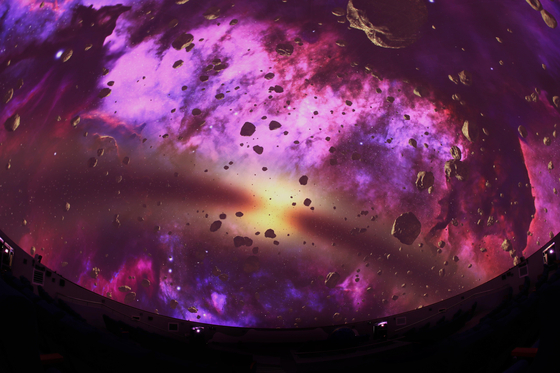 The computer graphics images that depict the early planets and asteroids that are born in the nebula are realistic. A divergent reporter

It is not just the night sky seen on Earth. Observations from NASA and ESA can be used to view Earth and other planets from the moon or Mars point of view, or travel like constellations on a spaceship. When asked if he could zoom in on Saturn, Saturn, with its distinctive rim as if the spacecraft was running at high speed toward Saturn, was full of snow. You can also see the night sky of a certain place in the future, past specific days, and so on. The Gwacheon Science Museum said, "I can see the night sky as seen from Gaeseong when I visited Korea in 918 AD." It is a time machine.

A spherical projection tube with a hemispherical 360 degree screen is a great movie theater itself. The Gwacheon Science Museum reopens the Astronomical Project Hall and opens new dome video and various genre video content screenings and events for two months in November and December. In November, five new dome videos will be screened on Saturdays and Sundays. It is based on the latest scientific achievements such as the 'Ice World' on Earth and the solar system, and 'Robot Exploration', which depicts the mystery of the solar system revealed by the robot probe. Every Saturday and Sunday in December, we open 'The Astronomical Project Grand Festival'. 14 latest dome movies will be screened on the theme of space, earth, time and dinosaurs. 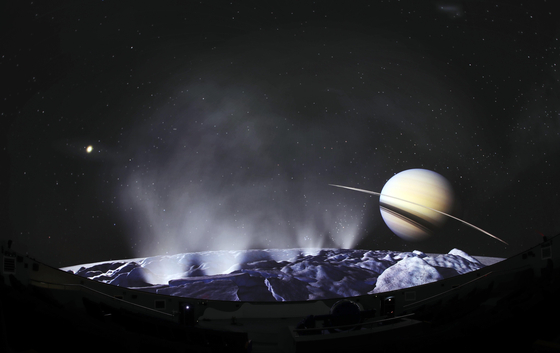 Park Dae-young said, "Moscow has recently entered a 37m-long dome projected into the sky." The Gwacheon Science Museum, the largest in Korea, will be among the top 15 in the world. "