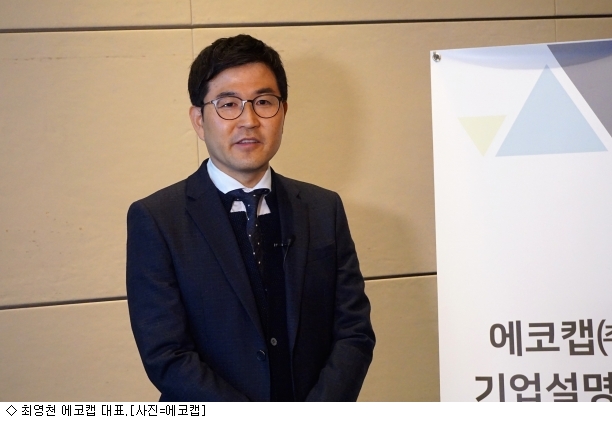 [아이뉴스24 한수연 기자] "We will achieve sales of KRW250 billion in 2023 with the KOSDAQ listing as a stepping stone."

Choi Kyung-chun, CEO of Eco-Cap, held a press conference on IPO in Yeouido, Seoul on December 12 and announced business vision and strategy. EcoCap, a company specialized in automobile electric parts, established in 2007, is expected to be listed on the KOSDAQ market by early next month.

W / H and cable, which are the main products, are the key devices that function like the blood vessels of the human body and transmit the signals and power from the car to each part. It is applied to all types of vehicles such as electric vehicles as well as internal combustion engines. Approximately 2,000 meters of cables and wiring are used per vehicle.

Choi said, "We have grown CAGR 42.4% over the past 10 years due to the growth of automobile wires, W / H and electric car parts business." Sales diversification "As a result, last year sales were 82.77 billion won and operating profit was 5.13 billion won."

The company is developing the world's first LED module with BMPCB (Bendable Metal PCB) technology to increase its market share.

Choi said, "Replacing existing bulb type shutdowns with the corresponding module has an energy saving effect of about 86%. We have already secured orders until 2020, as parts have already been applied to global new vehicles. I was confident.

EcoCap is flexibly responding to changing front market through development of EV parts and LED module business. In particular, the electric vehicle parts business has succeeded in winning the initial market, leading the way in order and supply.

"We have secured a large number of related parts orders from global companies ahead of the mass production of electric cars and the related sales will grow significantly every year from next year." In 2023, the portion of electric car parts increased by 40% "He said.

EcoCam is planning to increase sales of eco-friendly auto parts such as electric cars based on accumulated cable business know-how, while continuing sales growth by concentrating on expanding overseas market mainly in North America market. As part of this effort, the company is in the process of constructing a new production plant in Mexico and expanding its US logistics facilities. The company plans to establish a large-scale production base in North America to add flexibility to its product supply system and North American market response.

The total number of IPOs in the eco-cap is 4 million shares, and the preferred bid price per share is 4,200 won to 5,200 won. Up to about 20.8 billion won will be procured through this contest. The public offering fund will be used for facility investment, research and development.

On the other hand, eco-cap will conduct forecasts of demand for institutional investors between the 12th and 13th, and final concession will be confirmed and general subscription will be received from 19th to 20th. The representative director is IBK Investment & Securities and its listing date is early next month.

Choi said, "We will make a second leap in line with the expansion of the electric car market with this listing." As we are competing with global corporations beyond Asia, we are strengthening our market share and competitiveness through the KOSDAQ listing, We will grow into a leading company specialized in electric parts. "