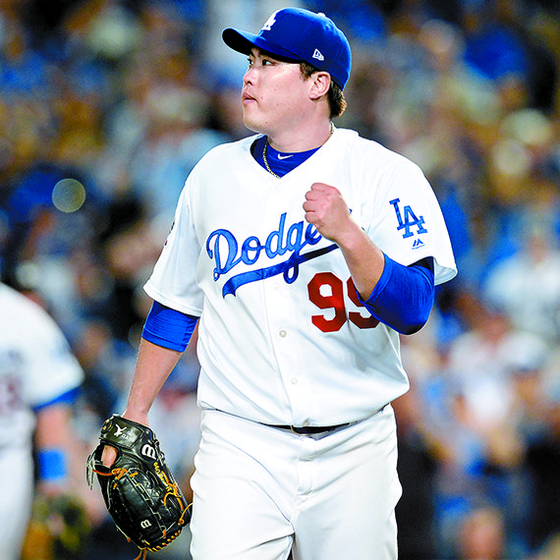 LOS ANGELES (Reuters) – The Los Angeles Dodgers' Ryan Hyun-jin is holding his fist after scoring a 7-inning scoreless start in the first game of the division series against Atlanta on May 5. [USA TODAY=연합뉴스]

"I was surprised every time I got a report. I was more surprised to see him directly. I decided to use it as a starting pitcher. "

In the spring of 2006, Kim In-sik was left Hanwha Camp in Hawaii to lead the World Baseball Classic (WBC). Coach Kim received a report from Hanhwa coaches on a regular basis, but the topic was 'The guy' and Ryu Hyun-jin (31, LA Dodgers). In the first round of the second round (overall second place), Ryu Hyun-jin who joined Hanhwa in 2006 joined Kim in the rotation with the start of regular season.

Ryu Hyun-jin scored 10 runs in the 7th and 1/3 innings of LG JangSil on April 12, which was his debut. It was the first time in the history of the KBO league that high school players won their debut. He was 18-6 with an average ERA of 2.23 and 204 strikeouts. His salary at the time, who won the MVP as well as the rookie, is 20 million won. Ryu Hyun-jin, a good-natured person, was tough enough to pay for food.

Ryu has scored 98 wins (52 losses) with a 2.80 ERA in his career until he left Hanwha in 2012. Because Hanwha Power was so weak at the time, Ryu Hyun-jin did not receive much help from hitting, defense and bullpen. Ryu Hyun-jin, who spent the early and mid 20's in a difficult situation,

Ryu, who declared a major league challenge in 2013, signed with the Los Angeles Dodgers for a total of $ 36 million in six years (2013 ~ 18) (about 40.7 billion won, current exchange rate). He had left shoulder surgery in 2015 and injured his elbow and groin, but he was 40-28 with a 3.20 ERA in the big league. After finishing the season, he became a freelancer. The Dodgers offered him a qualifying offer (a one-year contract on condition that an athlete's club had an average salary for the top 125 players in the major leagues).

Ryu Hyun-jin finally decided to accept the Dodgers' QO on the 13th. Ryoo Hyun-jin was playing for the Dodgers for another year. Next year's salary is $ 17.9 million (about 20.36 billion won). The annual salary of 20 million won in 2006 jumped more than 100 times in 13 years. The $ 17.9 million annual salary is ranked 51st among all players in the major leagues and 23rd among pitchers. It is ranked 20th if it is only a starting pitcher. By next year 's salary, Ryu can buy 358 million of his favorite $ 5 in and out hamburgers. If you can eat it, you can buy 1 hamburger every 9 seconds and 10,000 per day. The boy's head became a young conglomerate. 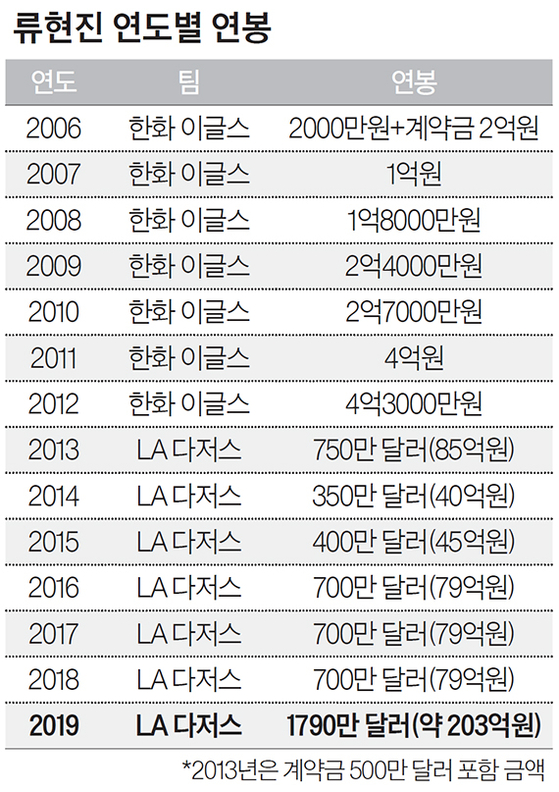 Ryu Hyun-jin's other choice was to go to the FA market without receiving QO. Of the seven big leaguers who received QOs this offseason, six, excluding Ryu Hyun Jin, refused. The annual salary of $ 17.9 million is quite high, but it is a stable choice to win a multi-year contract after FA declaration. Ryu Hyun-jin and agent Scott Boras were reportedly worried between the two options until Thursday.

Although it is advantageous to sign a free agent when young at the age of one, Ryu decided to go to the market a year later. Ryu Hyun-jin is optimistic about 2019 as much. Ryu Hyun-jin scored an average of 1.97 points, 7 wins and 3 losses, this season. From the first game of the division series to the second series of the World Series, he threw well in the postseason stage.

However, it is Ryu Hyun-Jin's "durability" that concerns the market. By 2015, he was resting for three months due to a groin injury when concerns about his left shoulder injury were lifted. There are not many teams that will offer a contract of more than three years to Ryu Hyun-jin, who is only half of the regular inning and threw only one-third of the innings. Local media reported that Texas, Seattle, and others might be recruiting Ryu Hyun-jin, but the estimated salary was about 10 million dollars (about 11.3 billion won). Ryu Hyun-jin eventually proved his health and chose the way to launch a real hit.

From the time of the boy 's youth, Ryu – hyun defied all kinds of worries. He had the power to undergo surgery on his left elbow during high school, and professional clubs were reluctant to nominate him. If the pitcher was not a thin Hanwha, Ryu Hyun-jin might have taken quite a while to get up in Group 1. The Dodgers were concerned that Ryu Hyun-jin was not pitching in the bullpen. Some also smoked cigarettes and criticized eating habits like hamburgers.

Ryu did not respond at all to solve problems in his own way. There is little to eat a hamburger for a good-looking wife, but he still does not pitch the bullpen before the break. After a shoulder operation of less than 20% success rate, Ryu Hyun Jin came back with a stronger cut with fastball and curve. Jung Min – chul commentator, who was a senior and coach of Ryu Hyun – jin during the Hanhwa period, said, "Ryu, He is also a talented pitcher, but he has had the courage to overcome difficulties in his own way. "

It is said that the acceptance of QO is 'FA unsuccessful'. The reason Ryu Hyun-jin chose the luck was that he was ready for that and that means he is confident.

[단독]., Jung In applies murder crime to wol … Wol is the alleged woman