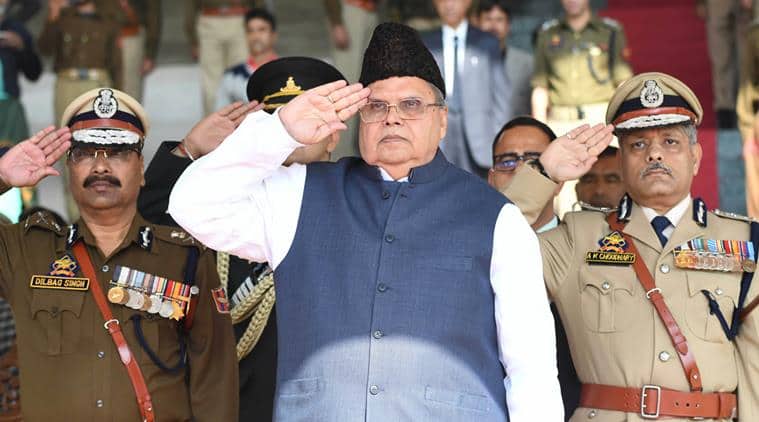 When the debate over its decision to dissolve the Jammu and Kashmir Assembly and ignoring claims to power, Governor Satya Pal Malik said he had looked Delhi, he would have to install a government led by Sajad Lone, and history would have remembered him as a "dishonest man".

Lone heads the People's Conference and has the backing of the BJP. On November 21, a separate letter stating claim to form the government, PDP's Mehbooba Mufti cited support of the Congress and National Conference, while Lone said he had the support of the BJP and other MLAs. Within hours, Malik dissolved the Assembly.

Justified his decision – The J & K Assembly had been suspended animation after Governor's rule was imposed in June – Malik told a gathering at the ITM University in Gwalior last Saturday: "Away from Clear Clear Doom that Delhi who taraf dekhta toh Lone who sarkar mujhko banani padti. Aur my itihas me ek atan aadmi ke taur pe jata. Lihaza mainey mamle ko hi khatam kar diya. You've got to say that, lekin my convinced hoon that mainey teek came kiya. "(And let me make it clear once again that I looked towards Delhi, then I would have to install Lone's government and my name would have gone down history as a dishonest man, so I ended the matter once and for all, those who abuse me will continue to do so, but I am convinced I did the right thing.

Leaving aside the fax machine fiasco, good to see that governor Sb refused to take dictation from Delhi, rather opted for dissolution of assembly. This could be unprecedented, given the story of democracy in the state.

Lone reacted aggressively to the governor's remarks, calling it "character assassination" and saying "I can not sit and watch a person rip me apart".
Mehbooba Mufti and Omar Abdullah, on the other hand, congratulated Malik for "not looking to Delhi". Taking to Twitter, Abdullah said: "My compliments to Governor Malik for not looking to Delhi & for not taking their instructions thereby stopping the installation of a government of the BJP & its proxies formed by horse trading, defections & use of money … we ' Also, never know a politically appointed governor going against the wishes of the Center. "

Mufti tweeted: "Leaving aside the fax machine fiasco, good to see that Governor Sb refused to take dictation from Delhi rather opted for dissolution of assembly. This could be unprecedented, given the story of democracy in the state. "

In Gwalior, Malik said he did not feel the need to ask anyone in Delhi since he met everyone there two days before he dissolved the House. "Had I asked them, it was possible they would have said the admin of office to Sajad Lone because he had been telling me six days and I will prove my majority. Is it my job to deliver the oath of office and then tell the person to break MLA ranks? "
On claims and counter-claims by rival parties about the number of MLAs with them, Malik said: "Both sides did not have the numbers. Mehboobaji did not submit any list, nor was there a list with Sajad Lone. "

My compliments to Governor Malik for not looking to Delhi & for not taking their instructions thereby stopping the installation of a government of the BJP & it's proxies formed by horse trading, defections & use of money.

Referring to Mehbooba's tweet staking claim to form the government and a similar message by Lone via WhatsApp, Malik said he was not aware that governments in J & K are also formed via WhatsApp and Twitter. "I had to start from the very beginning that if horse-trading starts, money will come. And so will terrorists and two-four people get killed, leading to disorder. This would have spoiled everything, including the ongoing panchayat elections, "he said.

After a video of his remarks did the rounds Tuesday, Malik clarified: "I did not speak to someone in Delhi, there was no intervention from there. What my statement meant was that if I had looked at or searched Delhi's intervention, then I would have asked Lone to form the government because he was going to form a government with support from the BJP. So, of course, I would have asked him. "

Malik said his mandate was that no government should be formed in J & K through "defection or under duress. Anyway, both of them (Omar Abdullah and Mehbooba Mufti) have since stated that this (dissolution of Assembly) was their plan all along. Then where is the problem? … There is a Chinese proverb that translates to 'moorkh ko aap chand dikhayenge toh wo ungli hi dekhega, chand nahin dekhega'. "

Lone, meanwhile, said: "I have been sitting patiently for the last three to four days and seeing myself being ripped apart. And the demonic caricatures being painted, especially at the hands of His Excellency, the Governor … Let me put the record straight. I was the first to call him. He was very cordial and he told me that you send a fax. After that, I tried my best for three hours to send the fax but it would not go through. "

Lone said the Governors' remarks have increased the threat to its security. "It's certainly a security risk. I have lost my father, in a different way. But again at the hands of militants. Given that on a daily basis, you paint me as some … favorite of Delhi is not going to decrease my security risk, "he said.

India does not complain about playing on green decks: Swann about pitch criticism

India may expand to Iran, Venezuela for oil imports