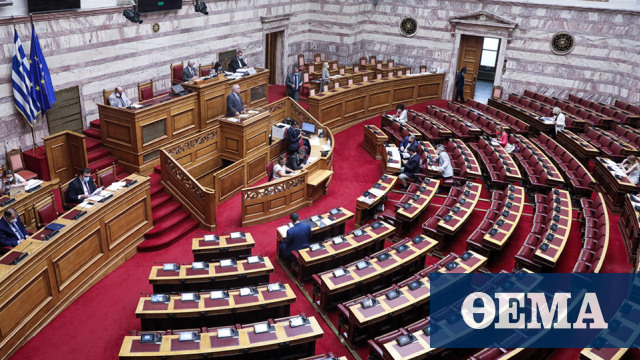 The statements were made public where did you come from politician. These are the statements made in 2020 by political leaders, members of parliament, MEPs, non-parliamentary ministers, mayors and mayors.

See here the lusts of politicians

The statements relate to the data on income and assets in the financial year 2019 and are posted on the website of the Parliament.

What the Prime Minister, Kyriakos Mitsotakis, is saying

The Prime Minister Kyriakos Mitsotakis declares income amount 82,021.81 euros, of which 11,800 euros from real estate.Specifically, the pair Mitsotakis explains 31 properties, apartments, houses, crops and warehouses in Chania, the Cyclades, Athens and Glyfada. Of the 31 properties, 24 are in the name of Kyriakos Mitsotakis and seven belong to his wife.The wife of the Prime Minister, Mareva Grabovski, declared in 2020, for the fiscal year 2019, a total income of 64,671.95 euros.

The lust of Alexis Tsipras for youAs evidenced by the statement of his whereabouts Alexis Tsipras for 2020, their tax-exempt income is 34,424.05 euros. The total net income from paid services, permits, additional fees, etc. (Taxable, taxable in a special way, independent tax, tax free) is 32,961.68 euros.He also has 11.50 euros in dividends, interest and royalties.

The wish of Fofi Gennimata

Income of 36. 627 euros declares the president of the Movement for Change, Fofi Gennimata, while her statement also includes 33,953 euros (salaries, etc.) and 11,845 euros (of real estate) from her husband. Also, Mrs. Gennimata’s husband received 12,549 from retrospective.

As for the deposits, the president of the Movement for Change has 83 thousand euros in Greek banks and various small amounts, while her husband has accounts with a balance of 99 thousand euros and an account with 18 thousand US dollars.

They have 30 properties, including apartments, detached houses and plots of land, most of which have parental benefits, without money transaction. Mrs. Gennimata also owns a 1500 cubic centimeter car.

What Dimitris Koutsoumbas puts it

The Secretary General of the KKE, Dimitris Koutsoumbas declares for 2019 income from his parliamentary distribution 73,466 euros, while his wife 18,176 euros and only 2.50 euros from interest and dividends.

It has no shares, bonds, or bank locks. His deposits in the National Bank (in two of the five accounts are losers third) are 4,024 euros.

His wife Anastasia Kontogiannis has 4,099 euros in one account at Eurobank and 117 euros in another, where a debtor appears third, while at the National Bank she has 6,304 euros and 37 euros in a second. The Koutsoumba family owns two properties, one in Viotia and one in Fthiotida and a passenger car.

The income of Kyriakos Velopoulos

The president of the Hellenic solution shows an income that reaches 39,500 euros, Kyriakos Velopoulos for the financial year 2019 while his wife 11,573 euros.

He and his wife hold two bank bells at Eurobank, with his wife a property in Panorama, Thessaloniki, 312 m. Mr Velopoulos, however, has no other property.

He presents a variety of bank accounts, of which he is outstanding at Deutsche Bank. Specifically, he has deposits of 434,311 euros, with his total deposits 520,000 euros. Finally, he has two cars, one of 2,100 cubic meters each and one (of his wife) of 1500 cubic centimeters.

The disclosure is based on the statements made in 2020 and, as a result, data on the revenue and capacity of the policy will be revealed in the financial year 2019, the year in which the elections took place and the change of government took place. This means that in the statements, which are posted on the Parliament’s website, the financial situation of the directors of both the outgoing government of SYRIZANEL and the government of ND, which puts the reins in the middle of 2019, is radiographic.

How much did Yanis Varoufakis say

See here who controls the “where do you come from”

Patras: “Battle” with the fire in Drosia – The fire front in Elekistra is in recession

Where will the heat rise today – Up to 42 degrees the thermometer will show!

Where are you going: Today, the declarations of the “300” of Parliament will be made public

“Now her face can hide behind a mask, but …”

Champions League: “Gela” Paris in the premiere of Messi, Liverpool and Real won the derby

The sea was painted red: 1,428 dolphins killed “for use” in the Faroe Islands

The Dead Sea was “painted” red