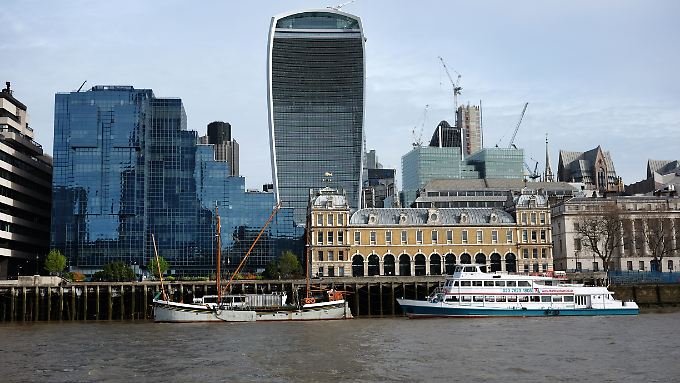 In London, the Bank of England also plays the extreme consequences of the Brexit.(Photo: picture alliance / Jens Kalaene /)

The United Kingdom's central bank records an economic horror scenario with an unplanned brexit, rising unemployment, currency loss and inflation. The country's financial structures, however, were prepared for the seriousness of the situation.

An unhealthy brexite could trigger the heaviest recession since World War II in Britain according to the Bank of England (BoE). The British economy is likely to shrink by eight per cent without an agreement with the EU within one year, writes the central bank in its report on brexit.

Unemployment will increase considerably in view of the loss of growth as estimated by the BoE. Also, in the financial markets, the central bank expects violent reactions. So, the British pound would give up 25 percent to the US dollar. The significant decline in the pound is likely to increase the inflation rate to 6.5 percent. The central bank would then be forced into considerable interest rates. At the peak, the interest rate could rise to 5.5 percent.

According to the Central Bank, the UK financial institutions are also able to survive a disarmament from the EU and a serious crisis caused by it. The British banking system was strong enough to allow budgets and budgets to continue to be sufficiently affordable in such a case, said the Bank of England in London. This has resulted in a stress test in the industry: "No bank needs to increase its capital cushion."

The test had to undergo seven major monetary houses in the country, including HSBC, Barclays, Royal Bank of Scotland, Standard Chartered and Llodys. UK wants the EU to leave the EU at the end of March 2019. Whether with or without exit agreement is still open – the Parliament in London decides on 11 December on the divorce treaty with the EU, negotiated by Prime Minister Theresa May, and criticized by many sides. A "Yes" to the MPs is not safe.

In the financial checkups of the financial houses, the Bank of England had simulated a violent fall of the British and global economy. In addition, there was a high cost of banking misery in the adverse scenario. Overall, the fictitious capital loss of all monetized monetary houses has amounted to 170 billion pounds, the Central Bank said. However, the institutes were still able to make loans under the most difficult conditions. They also had sufficient cash and cash equivalents in the form of bonds and other securities to spend more than three months without access to their normal refinancing markets.

More about the subject

At Lloyds, the hard core capital ratio (CET-1) was an important measure of the bank's resilience in a crisis – "under stress" and no counterbalance of bank management or conversion of capital buffers to 6.3 percent, at Barclays at 6.9, at HSBC at 5.8, at Standard Chartered to 7.1 and at the Royal Bank of Scotland to 9.6 percent.

In addition to the major banks, the British subsidiary of the Spanish bank Santander and the Nasawide Building Society Bausparkasse participated in the sample test. The British Institutes cut off the test in their home country with the exception of Barclays worse than a partially comparable fitness check in the industry by the EBA's EBA, whose results were released in early November. At that time, Barclays and Lloyds were among the 48 lightly-tested institutes from all over the European Union. The hard core capital of Barclays was "at stress" then 6.37 percent – so badly, no other bank had cut off. Lloyds came to 6.8 percent at the load test, HSBC at 9.18 and the Royal Bank of Scotland at 9.92 percent.