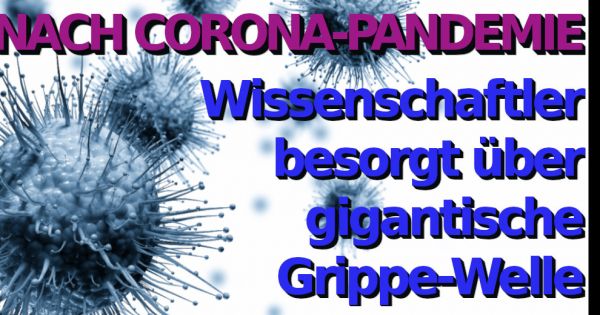 More than a year after the corona pandemic began, the coronavirus is still keeping the world in suspense. But scientists are already worried about the flu virus. They assume that the next flu season could be particularly intense.

Is there a threat of a big wave of flu after the corona pandemic?

The current flu season was almost completely canceled due to the corona protection measures. In the United States, there have been only 2,000 laboratory-confirmed flu cases this season – typically around 200,000 at this time of year. Editor Lauren Dunn reports on the portal of NBC NewsWorldwide, there are between nine and 45 million cases per flu season.

Due to the protective measures against the coronavirus, the flu virus had almost no chance of spreading this year. However, there are not only benefits. According to Dr. Andy Pekosz, professor of microbiology at the Johns Hopkins Bloomberg School of Public Health, often follows a year with flu with a particularly high flu year. There are several reasons for this.

Almost no immunity to current strains of influenza

“We now have a period of more than a year in which a significant portion of the population is not infected with flu and thus could gain immunity,” says Pekosz. “That could mean that the population’s vulnerability to the flu will increase.”

When you get the flu, you develop a certain level of immune protection against the virus. This is why children are even more susceptible to flu – their (partial) immunity needs to be built up first. But since it was barely infected with the flu this year, the number of people without immune protection is particularly high.

More deaths due to flu virus to corona?

“Low immunity to populations can lead to more cases,” said Scott Hensley, a microbiologist at the Perelman School of Medicine at the University of Pennsylvania. “We could see more infant deaths and at the same time an increase in cases across the population. This is because the immunity of the population as a whole is likely to be low.” With lower immune protection, the disease caused by the virus can be more severe.

Many flu strains limit the active substance of vaccines

“It’s interesting,” Hensley said. “Most of the time, there is a great deal of genetic diversity in these viruses.” That is not the case this year. It is unclear whether fewer variants of the flu virus are actually circulating or that fewer variants can be detected due to the low number of infections.

“In general, we want less genetic diversity,” explains Sarah Cobey, an epidemiologist and evolutionary biologist at the University of Chicago. Because the lower the number of virus strains, the better the vaccination works. In recent years, the flu strain H3N2 has been shown to be problematic because it has so many small strains, making it more difficult for the vaccine to protect against. But a few strains have been identified this year.

At the same time, however, there is also the problem, because the lack of data on strains of influenza virus means that the following vaccine may not be enough. “Since we had such bad cases, we use a small number to make our selection,” Pekosz said. “There may be low numbers of strains circulating that can dominate. We’re usually worried about this flu season, but we usually have a much larger set of data to choose from.”

Although the flu virus was first isolated more than 80 years ago, there is still a lot to learn, according to scientists. “What’s really challenging about flu is that it develops rapidly,” Cobey said, adding that flu viruses mutate faster than SARS-CoV-2. “Every year we see flu viruses that have never been seen before on this planet.”

We may be curious to see if a major flu wave will send us to the coronavirus pandemic. After all, we already have faxes. The experts recommend vaccinating against flu for the next flu season.

follow News.de al at Facebook en YouTube? Here you will find the latest news, the latest videos, great leagues and a direct line to the editors.

The coach should now set an example