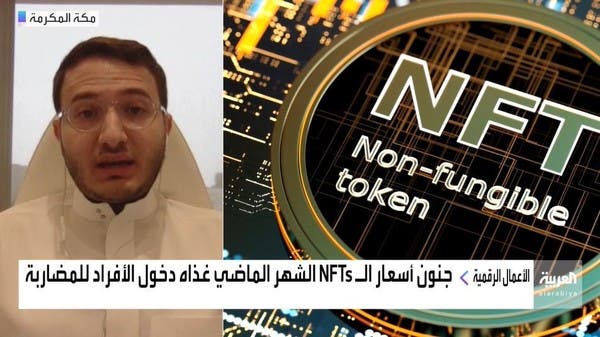 Prices for digital collectibles such as art and sports memorabilia have dropped, refocusing on whether the emerging market for so-called non-exchangeable tokens is more than a temporary obsession.

Financial analyst Abdullah Mashat said in an interview with Al-Arabiya that the collapse of non-exchangeable assets came after the price hike that triggered the movements of individual speculators entering a new market.

He explained that there are digital capabilities and digital panels across various applications, indicating that the madness that the prices were achieved was aimed at achieving the biggest and fastest advantage of this market.

He pointed out that some of these assets reached fantastic prices last month, until a painting was sold for $ 69 million.

He added that the most prominent use of these non-replaceable symbols will be in future artboards, which guarantee the value to the owner of the drawing and the date of their drawing, and therefore NFT technologies will help in customizing of the issue of intellectual property rights for digital assets.

Average prices for non-exchangeable tokens – which are tradable digital certificates and use blockchain technology to prove ownership of assets online – have dropped nearly 70% from their peak in February to an average of $ 1,400, according to Nonfungible.com, which group Variety follows from token marks.

This comes as the growing interest in NFT’s peaked last month when a digital artwork from Beeple was sold for $ 69.3 million, according to Bloomberg, and viewed by Al Arabiya.net.

Some argue that the non-exchangeable tokens were one of the results of the major stimulus processes of central banks worldwide, and they are destined to disappear with the end of these plans. Others who study technology argue that using the blockchain to create digital power is a perpetual innovation rather than a price tag.

“It’s not helpful to describe the concept as a financial bubble,” said Chris Wilmer, a graduate of the University of Pittsburgh. He stressed that non-exchangeable tokens do not sit in a bubble compared to cryptocurrencies.

The sale of blockchain-based digital assets was already in 2018, when 10 collectors paid $ 1 million for a digital photo of a rose.

Despite the decline in trading volumes and average prices of recent peaks in February, other data shows that many NFTs are still making large profits for 2021. During the first quarter, the market value of the 38 non-exchangeable assets followed by the CoinMarketCap platform increased by more than Eight times to $ 22.5 billion.