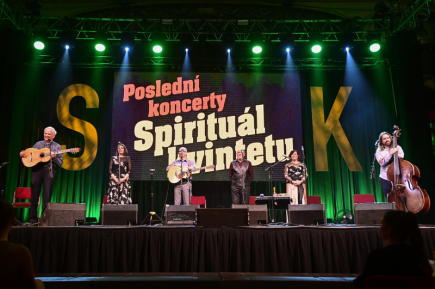 PRAGUE – The oldest Czechoslovakian folk group Spiritual Quintet played today the last of a series of fourteen farewell concerts in the sold-out Prague Lucerna. After several additions, she ended her sixty-year concert career with the song Fresh Wind from the album of the same name from 2012, which was sung with her by an impressed audience. At the end of the concert, the founder Jiří Tichota thanks the audience for their long favorite. “Without you, the Spirit song would not be so long,” said the 84-year-old musician.

The band announced the end of their performance last spring. However, due to the coronavirus epidemic, the farewell to the public lasted until this autumn. The Spiritual Quintet launched a series of fourteen concerts last March 1. However, he managed to play only two until the declaration of a state of emergency. Then, last April 16, at the age of 82, singer and double bassist Dušan Vančura died suddenly. “Compared to the first concert, we were missing one microphone,” Tichota said.

“I’m convinced that none of us who have stood on that stage today and played ten, fifteen or sixty years in the quintet, will ever experience that in the life of the musician. It is not to be repeated. I once heard that the Spiritual Quintet is not only a band, but it is also a cultural and social phenomenon.When I was a member of the Spiritual, I would resist it, now I can say that I agree, told Holoubek ČTK.

The band offered their listeners their ballads and spirituals such as Tread on, The War of the Roses, Thirst or the Tower of Babel. They also welcome the opera singer Dagmar Pecková, who sat in the auditorium and who performed with her a while ago. She performed at the end of the evening with her singing at the band. The lyricist František Novotný was also a great success, and traditionally composed a poem for four words randomly chosen by the audience.

Even after a while, they waited for the songs present, which sang many of them. Among other things, one of the oldest songs of the Spiritual Stream sounded, people joined the song Whistling Gypsy and sang hits with the band such as When the Right Comes Back to Us, Cruel War, For Your Truth to Stand, The Wayfarer or One Will Be On, the Czech version of the traditional We Shall Overcome.

The Spiritual Quintet was founded in 1960 as a men’s quartet. In addition to guitarist Tichota, bassist Ivo Mácha, tenor Miroslav Keller and baritone Miloslav Kastelovič were present at his birth. The band, professionalized after 1989, had thousands of shows and sold hundreds of thousands of records. Their concerts were once sold out during communist totalitarianism.