Alert Ready system is tested across the country for second time 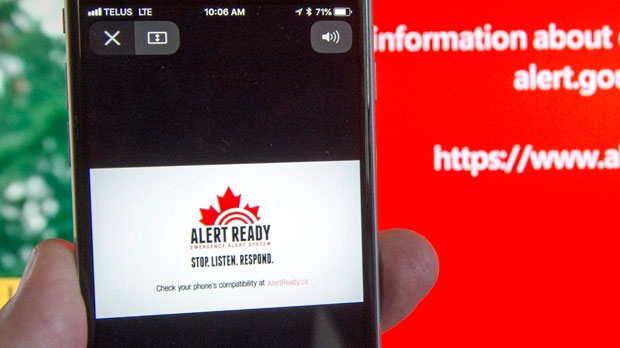 OAKVILLE, Ont. – Most Canadians can expect their mobile phones, televisions and radios to sound off today as the Alert Ready system undergoes a second round of testing.

Provincial emergency management organizations will conduct simultaneous public alerting tests throughout the country in a bid to ensure that people receive emergency alerts and can take action to stay safe.

Test alerts are supposed to appear on updated and compatible mobile devices connected to a LTE wireless network at 1:55 pm. local time, with the exception of Quebec where the test will be done one hour later.

This second test comes after Manitoba Infrastructure's Emergency Measures Organizations said only 60 per cent of wireless users received an alert in a test of the system in May.

The first test did not sound quite in Quebec due to a coding error, which the system operator said was fixed within a couple of hours.

In Ontario, some test alerts were heard and felt on mobile devices, but many wireless subscribers did not receive any signals.

The CRTC requires 50 percent of wireless devices sold in Canada to be compatible with Alert Ready, but the coverage rate should increase after April when compatibility will be a requirement in all devices for sale.