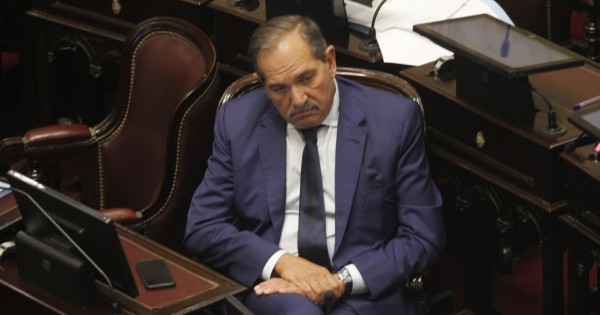 Joshua Alperovich tucumano announced that he will leave the bench led by Miguel Pichetto and make an interblock with Cristina Kirchner in a preview of what could be the main break in Senate Peronism. Elections in 2019.

The past governor has accelerated the break with Juan Manzur in the past few days.

In this context Alperovich moves on Monday to join the FPV away from the Pichetto block. "The Federal Block does not represent me, and we will bring together an interblock with Cristina Kirchner, declared in AM 530." The rupture will be reflected in the budget session that Tucumano rejects . "In a few days we will move that step," he added.

Together with the former governor, the co-state's Beatriz Mirkin will leave PJ Block. Senator Alperovich's faithful ally is already warning the vote against the budget. As an object, Christina made an interblock with eleven senators and Pichetto's bench was 22 people.

Alperovich emerged as a candidate outside PJ,

However, the rupture of peronism may be larger. As the LPO continued, a fracture was found in the discussion of Miguel Pichetto and Jos Mayans last week

The formose-leal from Gildo Insfrn, one of several governors close to Christina, is another name that can be removed.

Pampeanos Norma Durango and Daniel Lovera are in similar situations, but Pichetto does not answer Catamarquea Ins Blas, which is close to Governor Lucia Corpacci. Mario Pas from Chubut has been strengthening his speech against the government and knows he will not be promoted to the Magistracy Council.

Fueguinos Jos Ojeda and Julio Cataln Magni were faithful to Río Negro, until he let the raid on Cristina and leave their cow bench. His governor, Rosana Bertone, Interview with LPO Like his colleagues, he does not want two Peronist fronts that divide the opposition. You can then merge them only. Your alliance With his local La Cmpora, any movement in Parliament will be a message for a long election year coming soon.

The fight between Pichetto and Mayans left Peronism on the verge of ruin.

Loyal to the Pichetto are Carlos Caserio, Rodolfo Urtubey, Dalmacio Mera, Correntino Carlos Espnola, Eduardo Aguilar, and many others. ) They usually accompany the entrerrianos Pedro Guastavino and Sigrid Kunath. Omar Perotti, Alfredo Luenzo, and Guillermo Snopek attended the Mini Summit but did not return anymore. And Sanjauninos Jos Uac and Cristina Valverde did not talk about Cristina as their boss, but they supported their raids and did not raise the discourse of Peronist units.

Pichetto's immediate problem is that the seats of the Magistracy council are now defined and Peronism is in serious danger of losing two by the majority. Its interblock is smaller than that of Cambiemos, but it aims to overcome it with signatures of allies like Santiago and the people from the missionaries. With the flight of tucumanos and other possible rebels, rionegrino can rely on negotiations with Cristina.

Copyright La Politica Online SA 2018.
Do not cut or paste notes on the web. You can use the tool to redistribute notes.