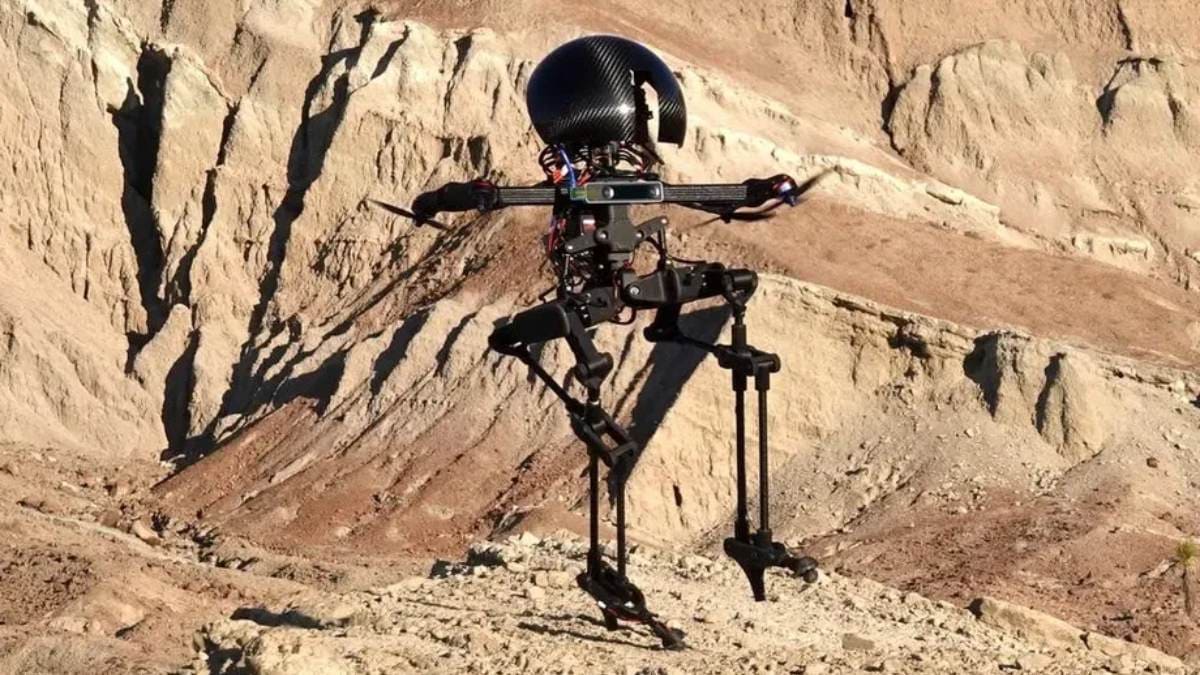 A team of researchers at the California Institute of Technology (Caltech) has devised a bipedal robot that performs the twin function of walking and flying. The team claims that their latest creation is not only agile but also capable of complex movements. The name Leonardo, the robot for partial running, partial flying drone is built in such a way that it can balance itself on a slackline, jump around, or even ride a skateboard.

Designed and developed by Caltech’s Center for Autonomous Systems and Technologies (CAST), the robot’s multiple joint legs and propeller-based thrusters help it achieve a fine level of control over its balance, researchers say.

Speaking about the project, Soon-Jo Chung, Bren professor of Aerospace and Control and Dynamical Systems, says the team drew inspiration from nature, adding that the birds can fly and also navigate phone lines. “A complex but intriguing behavior occurs when birds move between walking and flying,” says Chung, who is also the corresponding author of the study, adding that the researchers wanted to understand and learn from it.

Chung points out that the way Leonardo uses synchronized control of split propeller-based thrusters and leg joints is similar to a man in a jet suit controlling his / her legs and feet when landing and take-off. “We wanted to study the interface of walking and flying from a dynamics and control perspective.”

The team said bipedal robots are capable of tackling complex terrain just as humans move while jumping or running or even climbing stairs. However, when it comes to rough terrain, it becomes difficult for these machines. But that’s when Leonardo’s flying function comes to the rescue – if it can not run or jump on the ground, it can simply fly over.

Kyunam Kim, a postdoctoral researcher, says that a robot like Leonardo can navigate through challenging environments more efficiently compared to traditional robots because it alternates between the two available means of movement. Leonardo “aims to bridge the gap between the two distinct domains of aerial and bipedal locomotive that are not typically intertwined in existing robotic systems,” says Kim, who is also the co-lead author of the paper.

There are also some restrictions. Leonardo not only consumes excess energy when flying, but also has limited charge capacity.